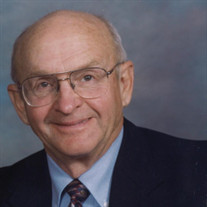 Albert (Bud) Larson, of International Falls, MN, entered into heaven on March 7, 2020 at the age of 86. Albert Leon Larson was born on August 26, 1933 in Spooner, MN to Rommick Soren (Melvin Ralph) and Nannie Johanna (Johnson) Larson. Bud grew up in Baudette, MN and graduated in 1952 from Baudette High School. On July 14, 1956 he married the love of his life, Edith Jeannette (Jean) Keyes at the Mission Covenant Church in International Falls, MN. Bud & Jean celebrated 63 years of marriage before his death. Bud and Jean were the proud parents of Brenda Jo (Larson) Hjelle and grandparents of Bryce and Brady Hjelle. At the age of 21, Bud began employment at Minnesota and Ontario Paper Company as a spare man in the pulp mill. After a short transfer to the corporate office in Minneapolis, working in the budget department; he and Jean returned to the Falls and he eventually became the Controller of Boise Cascade Corporation. This was a position he held for over 20 years until his retirement in 1992. Bud was known as a kind, fair, but no nonsense manager to his co-workers and staff. The center of Bud’s life was God and his family. Throughout his years as a member of the Mission Covenant Church, which later became the Evangelical Covenant Church; he served in various roles including Teen Leader, Sunday School Teacher, Church Board Member, Bluewater Covenant Bible Camp Representative, and 55+ Organizer. Bud had a great sense of humor and always had a line-up of jokes ready to tell at the next dinner party or family gathering. He was also an avid hunter and enjoyed fishing, snowmobiling, camping, woodworking, attending sporting events (especially those involving his grandsons), and spending time at the cabin. Bud & Jean enjoyed traveling with family and friends. Their annual vacations included trips to Europe to visit relatives, Mexico, and throughout the U.S. and Canada. Bud was known for his generosity to his family, friends, church, and various organizations. Bud was a very skilled carpenter. He constructed three homes “in his spare time”. He and his friends also installed a ground level pool in the International Falls area, which was the first of its kind at the time. The Larson pool was used for hosting many activities; including Covenant Church Teen & Sunday School parties, son-in-law Paul Hjelle’s classroom parties, and neighborhood & 4th of July celebrations with numerous family and friends. Besides his parents, Bud is predeceased by brother, Melvin Arthur and brother-in-law Ervin Boyum. He is survived by loving wife, Jean Larson, daughter Brenda (Paul) Hjelle, grandsons Bryce (Blair) Hjelle & Brady Hjelle, sister, Muriel Elaine Boyum, brothers-in-law/sisters-in-law Gary (Janet) Keyes, Diane (Wayne) Cousineau and nieces/nephews Jeff Boyum, Dale (Mary) Boyum, Kurt (Cindy) Boyum, Kristi (Lou) Garcia, Eric (Kristi) Keyes, Greg (Michelle) Keyes, Andy (Kate) Keyes, Wayne Cousineau, Brad Cousineau, Brian Cousineau, Annette Porter, Nathan (Missy) Cousineau. Also surviving is special cousin Nan Sether and family. A special thank you to all the staff and residents at Littlefork Care Center for the endless care and attentiveness that Bud required in the last few months of his life. A funeral service will be held on Friday, March 13, 2020 at 2:00 PM at the Evangelical Covenant Church in International Falls, MN. A visitation will be held one hour prior to the funeral. Family would prefer memorials to the Evangelical Covenant Church, Bluewater Covenant Bible Camp, KBHW Psalm FM radio station, or Gideons International.

The family of Albert "Bud" Leon Larson created this Life Tributes page to make it easy to share your memories.