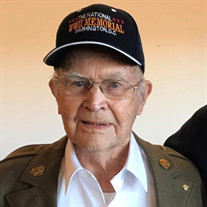 Allan Walter Anderson entered his eternal life on May 3, 2020. After 101 years of living, Allan passed away peacefully with his family by his side in the home he built and lived in for the last 60 years. Allan was born December 19, 1918 in Cambridge, Massachusetts to Swedish immigrants Tekla and Edwin Anderson. The family moved to northern Minnesota and settled in Border where Allan grew up and attended school along the banks of the Rainy River. In 1941 he answered his country’s call to arms and served with the United States Army during World War II. Allan served in the Pacific Theater of Operations. While stationed on the Hawaiian Islands, he built defenses around the island of Oahu after the attack on Pearl Harbor. As the Pacific Campaign moved towards Japan, Allan took part in the invasions of Eniwetok Atoll and the Island of Saipan. In May of 1945 Allan was honorably discharged at the rank of Staff Sergeant. After his military service he worked construction in southern Minnesota for a short time, but returned to his roots in northern Minnesota where he farmed, logged, and worked for the Koochiching County Highway Department until his retirement in 1987. In 1956 Allan was united in marriage to Edna Frederick of Ericsburg and they had four children. Allan was a member of the Evangelical Covenant Church where he served in many positions including Trustee, Deacon, Vice Chairman, and Sunday School Bus Driver. He also served as a representative to Bluewater Bible Camp where he spent many weekends fixing cabins and doing maintenance work. He was also a member of the American Legion and the VFW. Allan was preceded in death by his parents Edwin and Tekla, brothers Edmond and wife Francis, Nels, Ralph, sister Ruth and husband Alden, brothers-in-law Ralph Frederick and Ron Leen. Allan is survived by his wife and soulmate of 63 ½ years, Edna, daughter Sue (Ed) Natysin, sons Allan C (Beth), Ron (Sandy), and Tim (Robin), sisters-in-law Mildred Anderson, Carol (Howie) Hauge, Betty (Randy) McGuire, brother-in-law Richard (Renee) Frederick, 11 grandchildren and 10 great grandchildren. A public memorial service with military rites will be held at the Evangelical Covenant Church on Saturday, October 31, 2020 at 10:00 a.m. A private graveside ceremony was held at the Ericsburg Cemetery at an earlier date. In lieu of flowers, the family would prefer memorials to the Evangelical Covenant Church, Veterans of Foreign Wars Post 2948 of International Falls, or the Ericsburg Cemetery Association.

Allan Walter Anderson entered his eternal life on May 3, 2020. After 101 years of living, Allan passed away peacefully with his family by his side in the home he built and lived in for the last 60 years. Allan was born December 19, 1918... View Obituary & Service Information

The family of Allan Walter Anderson created this Life Tributes page to make it easy to share your memories.