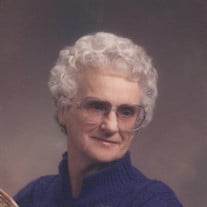 Ardis M. Lewis, Grammie, 98, a resident of the International Falls area since 1985 passed away peacefully at the Falls Good Samaritan Society on December 22, 2021. Ardis was born in Brooten, Minnesota on March 16th, 1923 to norwegian parents, Silas and Ella (Fauskee) Kjeldahl. Ardis was the oldest of the six Kjeldahl siblings. Ardis grew up in rural Brooten and Belgrade area helping on the family farm. While growing up she most often tended to neighbors and the elderly to earn any money. In 1942 she was married and gave the world a most precious daughter, Elaine Ardis. Then, in 1956, Ardis married Clarence Miller with whom she helped build a home and manage a sheep farm in rural Cyrus, MN. Ardis worked many other jobs over her lifetime in Morris, MN. After the passing of her second husband, Clarence, in 1970, Ardis married the love of her life, Mr. John B. Lewis (Jack). She truly cherished the short time she had with Jack; going on picnics and drinking coffee together. Eventually she retired from her caretaker position at the Morris Villa of St. Francis Care Center in 1985. She then moved to Int'l Falls to be near her daughter and family. Ardis, dearly loved and cherished her role as "Mother", "Grammie" and "Great Grammie". Laughing, loving, smiling and hugging all of them with her beautiful Norwegian self. Everyone always wanted to be at Grammie’s. Her family and friends especially enjoyed her lefse, rummagrut, potato roll sandwiches and glorified rice. The many things she also enjoyed were taking walks, making quilts, embroidery work and visiting all people. Her two favorite songs were "One Day at a Time" and "How Great Thou Art". Her favorite color, of course, was purple. Two last things of great importance to our dearest Grammie were firstly, to do a good deed for someone every day and secondly, was reciting Psalm 23. Ardis is survived by her dearest son-in-law, Keith Goulet; one brother, Harold Kjeldahl; Her five grandchildren and their spouses, John and Annie Goulet, Jodi and John Mote, Mary and Bob Borden, Marsha Goulet and Jan Marshall, Mark and Deseree Goulet; nine great-grandchildren, Branden (Brenda), Kent (Lisa), Clayton (Alyssa), Wayne, Jessica (Sean), Megan, Matthew, Reina, and Teah; and eight great-great grandchildren, Cora, Allie, Caleb, Hudson, Asher, Samuel, Elsie and Laaken. A graveside memorial service will take place at a later date in early 2022. A special note from Keith and family to the incredible staff and attendants of our dear Grammie at the Falls Good Samaritan Center... May the abundant efforts of love, comfort and concern to which you have shown Ardis carry you through a lifelong career of your own successes and joy. From the bottom of our hearts... THANK YOU!

Ardis M. Lewis, Grammie, 98, a resident of the International Falls area since 1985 passed away peacefully at the Falls Good Samaritan Society on December 22, 2021. Ardis was born in Brooten, Minnesota on March 16th, 1923 to norwegian parents,... View Obituary & Service Information

The family of Ardis Myrtle Lewis created this Life Tributes page to make it easy to share your memories.

Ardis M. Lewis, Grammie, 98, a resident of the International...

Send flowers to the Lewis family.