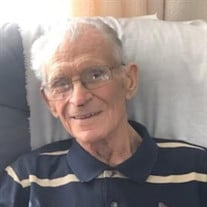 Arvid Frank Hoppe, 95, of International Falls, Minnesota, died on Thursday, April 29, 2021. He was born on October 23, 1925 at Brown’s Corner, International Falls to Frank and Milly (Jackson) Hoppe. He grew up in International Falls and graduated from Falls High School with the Class of 1944. Arvid was united in marriage to Dorothy Smith on November 24, 1946. He entered the Armed Air Force on November 29, 1943. He served in New Guinea, Mortar, and Philippines for 8 months. He earned air medal with cluster and four bronze battle participation stars. He was a nose gunner in a B-24 bomber and flew 29 missions in the South Pacific in World War II. He was discharged from the Armed Air Force on January 14, 1946 with the rank of Staff Sergeant. Arvid worked as a millwright for Boise Cascade for 44 ½ years. He was a lifetime member of the Veterans of Foreign Wars and the American Legion. He was also a fireman for the South International Falls Fire Department. Arvid loved hunting, fishing, and gardening. He was well known for his clean driveway every winter. He was preceded in death by his parents, Frank and Milly; brothers, Leonard Schley, Otis Hoppe, Herman Hoppe; sisters, Phyllis Hoppe, and Rilla (Einar) Korpi. He is survived by his wife, Dorothy; children, Janice Melbo of International Falls; son, Arvid (Bonnie) Brian Hoppe of Bemidji, MN; grandchildren, Kristy Pittman, Kelly (Brian) White, Kevin (Jessica Tran) Melbo, Krystle (Joe Rosso) Hoppe, Tyler Hoppe; great-grandchildren, Hannah (Maxwell) Jurvakainen, Amelia White, Emily White; brothers, Noel Hoppe, and Gilbert Hoppe (Lou Kirtnich). No services will be held at this time.

The family of Arvid Frank Hoppe created this Life Tributes page to make it easy to share your memories.

Send flowers to the Hoppe family.