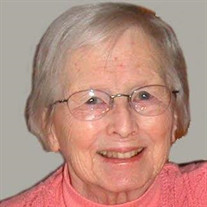 Audrey Niemi passed quietly in her sleep Monday, Jan. 21, 2019, at Mount Vernon, Iowa. She was 93 years old and had spent the last 11 months near family while recovering from bone fractures. Audrey was born in International Falls, Minn., to Peter William “Pete” and Helma Lydia (Ruska) Sterna on Feb. 12, 1925. She would be their only child, sparking her desire for children of her own. Maurice Nugent became her step-father after Pete’s untimely death in 1933. She married Benhard Eugene Niemi on Jan. 25, 1958. She was preceded in passing by daughter, Barbara C. Tyman; her parents and step-father; step-sister, Adeline Rudnick; and her husband, Ben, on Aug. 26, 2000. She is survived by five children and step-children — Richard E. Niemi, South Bend, Ind., Philip R. Niemi (Geri Corrigan), Cape Coral, Fla., William J. Niemi (Lori Parrish), Mt. Vernon, Iowa, Nancy E. Lund (Rick), Helotes, Texas, and Carol A. Niemi, Houston, Texas; three granddaughters, Elizabeth Lund (Ryan Hughes), Chicago, Ill., Monica Niemi, Mt. Vernon, N.Y., and Alison Jones (Brian), South Bend; and one grandson, Christopher Lund (Liz), Bryan-College Station, Texas. While raising a family, Audrey taught private piano lessons in the 1950s, ‘60s and ‘70s. Along with her husband, Ben, she was part of a vibrant community of music and arts education in the Borderland from the end of World War II into the 1970s. The practice and appreciation of instrumental music was emphasized within the family, and hundreds of students’ lives were enriched through her musical instruction. Ben and Audrey practiced faithfully, played with various ensembles and performed as a cello and piano duo, less frequently as the years went by. A few rare recordings remain and are cherished. She studied piano with Miss Patricia Lynch, graduated as valedictorian from Falls High School in 1943 and received a bachelor of science in instrumental music from Bemidji State University in 1971. She was a member of Tuesday Musicale and the Veterans of Foreign Wars Auxiliary. She sympathized with people who were having troubles and humanitarian causes. In addition to playing piano, Audrey enjoyed movies, particularly about the World War II era, reading, pets, home design, playing cards and crossword puzzles. She would feel honored by any memoriam to the International Falls Public Library, the VFW Auxiliary or The Salvation Army. A family memorial service is planned. Interment will be at Forest Hill Cemetery, International Falls. Condolences may be left at www.greenlarsen.com. Arrangements are with Green-Larsen Mortuary Inc.

Audrey Niemi passed quietly in her sleep Monday, Jan. 21, 2019, at Mount Vernon, Iowa. She was 93 years old and had spent the last 11 months near family while recovering from bone fractures. Audrey was born in International Falls, Minn., to... View Obituary & Service Information

The family of Audrey Luverne (Sterna) Niemi created this Life Tributes page to make it easy to share your memories.

Send flowers to the Niemi family.