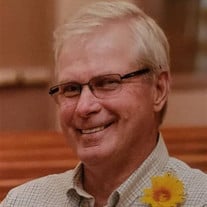 It is with great sadness that the family of Bradley Wilson Carlson announces his passing on Wednesday, January 12, 2022 at Rainy Lake Hospital, International Falls, Minnesota, USA. Brad was born in Fort Frances, Ontario on June 23, 1950 to Gerald and Velda Carlson. He lived his early years with his young family in Kenora, working primarily in the soft drink business (Silver Lake Beverages) until moving back to Fort Frances and taking up his life-long trade as meat cutter at Safeway (Canada) and later County Market (USA). He married his partner/friend Linda in 1984 and took up permanent residency with her in International Falls, where he lived until his passing. He will be sadly missed by his wife Linda, children, Michael (Amy), Tammy (Allen), Pamela (Shane), Shannon, and Christina. He also leaves behind ten grandchildren, four great-grandchildren, along with sister, Joanne (Joe) and brothers Brian (Anna), Gerald, and George, along with numerous nieces and nephews. Brad was predeceased by his parents Gerald (Margaret) and Velda (Peter), sister-in-law, Debbie, brothers-in-law, Bob and Larry, and nephew Brian Dean. He was a sports enthusiast during his growing up years and excelled at mostly everything he tried. He loved playing hockey, which he and his brother Brian play enthusiastically on Saturday nights, providing their spouses with lengthy stories as to why they did what they did while on the ice on that particular game. Bradley’s greatest passion was fishing, entering tournaments both great and small with his friends, children, grandchildren, and brothers. His basement fishing “store” had to have been seen to be believed. He leaves a hole that can’t be filled. You fought the hard fight, now it’s time to rest. Cremation has taken place and interment will be in Kenora, Ontario with a summer picnic being held once the families can get together safely. In memoriam, donations can be made to a charity of your choice, or the Heart and Stroke Foundation.

It is with great sadness that the family of Bradley Wilson Carlson announces his passing on Wednesday, January 12, 2022 at Rainy Lake Hospital, International Falls, Minnesota, USA. Brad was born in Fort Frances, Ontario on June 23, 1950 to... View Obituary & Service Information

The family of Bradley Wilson Carlson created this Life Tributes page to make it easy to share your memories.

It is with great sadness that the family of Bradley Wilson Carlson...

Send flowers to the Carlson family.