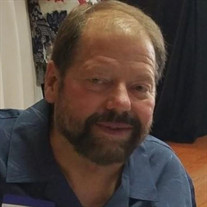 Brian Dale Russell, 65, of Littlefork, Minnesota, died on August 31, 2021 at St. Mary’s Hospital in Duluth, Minnesota after an extended illness. Brian was born on May 24, 1956 in Paris, Illinois to James and Gloria Russell (Alexander). He lived his early years in Paris, before moving to Mattoon, Illinois. He received a degree in Law and Enforcement and Police Science in 1976 from Lakeland College in Mattoon. He was employed by the City of Mattoon before establishing his own excavation and snow plowing business. He moved to Littlefork, Minnesota in 1992, relocating his business there. He then worked as a maintenance worker for Voyager’s National Park until he retired in 2002. He was one of a few recipients of the Bidstead Act of 1987 and he built his own log home south of Littlefork, where he resided until his death. Brian enjoyed competitive trap shooting and pistol competitions. He was an avid deer hunter with both a bow and rifle. He loved to travel and especially loved the Rocky Mountains of Colorado and Montana. He was a collector of Corvettes, owning eleven Corvettes over his lifetime. He enjoyed attending classic car shows and attending and working at gun shows all over Minnesota. He was preceded in death by his parents, James and Gloria Russell. Brian is survived by his love and life partner, Julie Beck (Tribby) of Littlefork, Minnesota; one daughter, Magan Neal of Winsor, Illinois; granddaughter, Annaliese Cowger of Winsor, Illinois; grandson, Bryar Cowger of Winsor, Illinois; godfather Dale Edwards of Paris, Illinois; and his beloved pets, Jack and Sammi. A memorial service will be held at 1:00 pm on Saturday, September 11, 2021 at Green-Larsen Mortuary in International Falls with Pastor Andy Berry officiating. In lieu of flowers, donations may be made to the Gift of Life Transplant House in Rochester, Minnesota.

Brian Dale Russell, 65, of Littlefork, Minnesota, died on August 31, 2021 at St. Mary&#8217;s Hospital in Duluth, Minnesota after an extended illness. Brian was born on May 24, 1956 in Paris, Illinois to James and Gloria Russell (Alexander).... View Obituary & Service Information

The family of Brian Dale Russell created this Life Tributes page to make it easy to share your memories.

Send flowers to the Russell family.