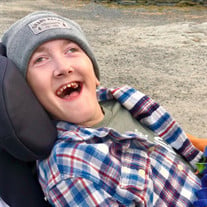 Carter Bradley Herberg was born on March 10, 2002. Carter’s entry into this world came just as unexpected, unplanned, and as eventful as anything else played out in his life. He came 6 weeks early, Mom, Dad and sister drove across the lake, stopped to pull out someone out of the ditch on the way to town, and then Mom and Carter were life-flighted to Duluth for Carter to make his grand entrance. Carter spent 32 days in the NICU, and as usual, had much of his family and friends close by and giving him and his family support during a difficult time. Carter grew up on an island with his family, which was just the beginning of his family ensuring that nothing would ever stop him from being included and being a part of “normal” life. Rainy lake was likely the beginning of his love for water. Carter thoroughly enjoyed being able to get in the water and float in his life jacket at the lake or in the pool at school with no one helping him. In the water Carter was free, kicking in circles, twisting his arms, and gulping water as he would shriek with excitement. Throughout the years Carter had many caregivers, many who he stole the hearts of, flirted with, spent countless hours with, and was loved immensely by. Those caregivers and lifelong friends also extended into his school family. Carter’s love for school started by the smiles and excitement of riding the bus and extended to the excitement he displayed while wheeling down the hallways and spending quality time with his teachers, Para’s, therapists, and classmates. It has been said that Carter sometimes taught those around him, more than they taught him. Over the years, he taught many the meaning of patience, perspective, happiness, communication, putting the possible in impossible, and the impact of one big smile. As his family would say, Carter could communicate more with his emotions than most can in their whole life. If you knew Carter, you also knew his family, they always came hand-in-hand. It took a team to support Carter and leaving him out of activities was simply not an option. Carter had the opportunity to go on a cruise, swim in the ocean, downhill ski, go horseback riding, and recently became an uncle. These are just a few of the many things that put a smile on Carter’s face, and will forever be cherished memories. Because of the continued advocacy and love his parents gave him, the passion and support of his siblings, and the unconditional love of his friends and family, Carter lived life to his fullest. Our little man will be greatly missed and certainly never forgotten. Carter is survived by his loving parents Jeff and Jodi, siblings: Cassie (Ryan) Thompson and Bailey Herberg; grandparents Ruth Herberg, Bob Rau and Kay Marie; niece Mila Thompson; special considerations: Heidi Thompson, Kellye Remus, Tara Harris, Leah Bacon, Reva Renollet, Sara Bacon, Whitney Gouin, Anna Cowman, Logen Amundson and Christi Ford; aunts and uncles Brent Rau, Beth Walker, Lisa and Craig McKenzie; cousins: Alex and Max Rau. Carter is proceeded in death by Romaine (“Herb”) Herberg and Bradley Herberg. A memorial with close friends and family is planned for Monday, January 4, 2021. A celebration of life will follow at Carter’s home. Carter’s family invites you to join them for an open house between 3 p.m. and 8 p.m. Due to COVID-19, please try to help them stagger your visits as you are able. (1957 Town Road 446/ PO Box 864, Int’l Falls, MN 56649) In lieu of flowers, the family has designated for memorial contributions that will be made to Heidi Thompson’s special education classroom as well as a scholarship for the graduating class of 2021.

Carter Bradley Herberg was born on March 10, 2002. Carter&#8217;s entry into this world came just as unexpected, unplanned, and as eventful as anything else played out in his life. He came 6 weeks early, Mom, Dad and sister drove across the... View Obituary & Service Information

The family of Carter Bradley Herberg created this Life Tributes page to make it easy to share your memories.

Send flowers to the Herberg family.