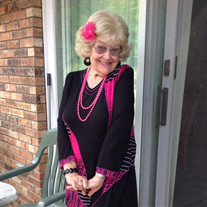 Corinne E. (Corky) Brindos passed away Saturday, April 6, 2019, at age 95. She was born Aug. 8, 1923, to Alf V. and Alice M. Johnson in International Falls, Minn. She attended the Falls High School and graduated in 1941. She worked as a clerk in the Koochiching County Courthouse for a brief time On Sept. 15, 1942, she married Max R. Brindos, the love of her life. Music brought them together, creating a most beautiful and loving marriage that lasted 58 years until his untimely death in March of 2000. Some of our earliest and fondest memories were of her singing and harmonizing with Dad while he played the guitar. We also remember being awakened by Dad’s band during jam sessions in the house into the wee hours while Mom would cook burgers for everyone. She had many and varied talents including gardening, wine making (her wild rose petal wine was a favorite), sewing, bowling, partridge hunting with Dad and exploring Minnesota in their camper. One of her prized accomplishments was her oil, acrylic and watercolor paintings, preferring landscapes. Some of her artwork is on display in Rainy River Community College’s permanent collection and each year she donate a painting to the Ruffed Grouse Society and various other organizations. Back in 1960, she, Dad, and brother Duane Johnson purchased The Melody Shop, which became BJ Music. She worked there for many years. Mom was very active in the community and belonged to several clubs, including The Degree of Honor, The Red Hats, Falls Art Club, sewing club and birthday clubs. At their lake home, they enjoyed many years of barbecues, volleyball, swimming and late night songfests in the gazebo. She and Dad spent a number of years exploring their ancestries, which led them to France, meeting many distant relatives. It was a highlight of their lives. Upon Dad’s retirement, they looked forward to traveling South each winter in their mobile home, making friends along the way. She was a health nut, strongly believing in exercise, good nutrition and Mother Nature’s remedies. Her desire to entertain compelled her to perform on stage for many variety shows at Backus, doing the Charleston and Jitterbug. Mom was a member of the Border Concert Association and when Backus was in jeopardy, she was passionate about helping to save the building, making a generous contribution for repairs and volunteering whenever possible. Years later, she was on stage again in the casting call talent shows during the bass tournament celebrations. She gave her last performance at age 90! She also loved to dance on Sundays at the Border Bar with her friends to Pat Porter’s music. She loved life and lived it to the fullest. Her smile and infectious personality would light up a room. Mom gave unselfishly and always had a kind word for everyone. So, with grief stricken heavy hearts, we say goodbye to our precious mother. She was preceded in death by her loving husband, Max R. Brindos; more recently, her son, Harvey R. Brindos; her parents, Alf V. and Alice M. Johnson; and two brothers, Leslie (Bud) Johnson and Rodney Johnson. She is survived by her brother, Duane (Maureen) Johnson of St. Cloud, Minn.; two daughters, Maxine (Robert) Hochman of Staten Island, N.Y., and June (Johnny) Mason of Deer River, Minn.; four grandchildren; five great-grandchildren; and many nieces and nephews. She had chosen to be cremated. A private ceremony will be conducted at the family’s hunting shack at a date to be determined. The family would prefer donations to Paws and Claws Koochiching County in her memory.

The family of Corinne E. "Corky" Brindos created this Life Tributes page to make it easy to share your memories.

Send flowers to the Brindos family.