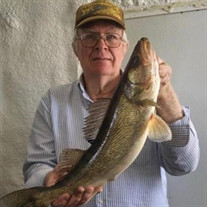 David Alexander Crosby, 79, of Ericsburg, Minnesota passed away January 5th, 2021 at Littlefork Care Center from complications of Alzheimer’s and kidney disease. David was born on May 3rd, 1941 at home on the family farm in Ericsburg, Minnesota. As a young boy he was a farmhand. He helped with gardening, milking cows, and caring for the draft and riding horses that they owned as well as boarded. He began hunting at the age of 7 and shot his first deer. As a young teen, he became a carpenter’s apprentice and learned how to build homes. He was taught many different trades and handyman skills of every kind, and was well on his way to becoming a jack of almost all trades. He was a 1959 graduate of Falls High School where he was a member of the Bronco wrestling team. He also enjoyed arm wrestling. In his late teens he worked at Coast to Coast Hardware in the Falls. He was united in marriage to Judy (Carlson) Crosby in 1961. He built the family home on 20 acres in Ericsburg. Judy passed away unexpectedly in 1972 and he was later united in marriage in 1975 to Avis (Johnson) Crosby of Ranier. He worked for the Duluth, Winnipeg, and Pacific railroad for a short time, and would later become employed at Boise Cascade where he was a papermaker for 42 years. He retired from Boise Cascade in 2003. He was well known for his quick wit and often times inappropriate sense of humor. He earned the nickname “Dingbat” or “Dingy” for the hilarious antics he was known for. He was a natural comedian, and enjoyed being social and making people laugh. He was truly one of a kind. He enjoyed hunting, fishing, camping, trapping, collecting guns, gardening, competitive snowmobile racing, making ammunition, woodworking, making fishing tackle, welding, riding ATV’s and snowmobiles, practicing target shooting on his property, as well as lending a helping hand to family, friends, and neighbors. In 1989 he purchased beautiful beach property on Lake of the Woods on Taylor Bay in Morson, Ontario where he built the family lake cabin which was where you would find him most often during his time off. He was a natural host and entertainer. His door was always open to family, friends and neighbors to share a cold one, eat freshly cooked fish or wild game from his latest hunting or fishing excursion, and tell jokes and tall tales about “the big one that got away.” When he wasn’t enjoying the outdoors or working, he would be busy outside chopping firewood or tinkering around in the garage working on the latest project or problem he was trying to solve. He was a member of the National Rifle Association, Papermakers Local 159 union, and past member of the Loyal Order of the Moose Lodge 1259 of International Falls. While his life was always busy between work and the outdoors, his greatest joy was his family. He enjoyed sharing his love of nature and the outdoors going on camping, fishing, and hunting trips with his family, and teaching life skills to his children and grandchildren. He is preceded in death by his first wife Judy (Carlson) Crosby, parents Richard and Margaret (Matheson) Crosby, brothers Donald and Paul Crosby, sister Virginia (Crosby) Kuhl, grandson Joshua Slatinski, and in-laws Ernest and Edna Johnson. He is survived by his wife of 45 years, Avis (Johnson) Crosby, children Pamela (David) Franko, Daniel Crosby, Amanda (Eric) Fannon. Grandchildren Nick Franko, Bryan (Alannah) Franko, Jacob Franko, Paige Crosby, Evan and Ethan Fannon. Great-grandchildren Rawley Franko, Rowyn, Talon, and Soryn Franko, and Skylar Stinski. Sister-in-law Shirley Crosby, brother-in-law John Kuhl and several nieces and nephews. David was blessed to have a second family through his first wife Judy. He was preceded in death by his in-laws Ray and Vickie Carlson, and survived by many special in-laws, nieces and nephews. Family and friends are welcome to come to the Celebration of Life open house that is scheduled on Saturday, June 12th from 3pm - 5pm at the Thunderbird Lodge banquet room. Thunderbird Lodge 2170 County Road 139 International Falls, MN 56649 If so desired, donations in his memory would be preferred to the Littlefork Care Center, Alzheimer's Association or the National Kidney Foundation.

David Alexander Crosby, 79, of Ericsburg, Minnesota passed away January 5th, 2021 at Littlefork Care Center from complications of Alzheimer&#8217;s and kidney disease. David was born on May 3rd, 1941 at home on the family farm in Ericsburg,... View Obituary & Service Information

The family of David Alexander Crosby created this Life Tributes page to make it easy to share your memories.

Send flowers to the Crosby family.