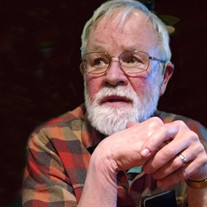 Dennis Maloney, part man, part machine, of International Falls, Minnesota, died on December 31, 2019 at St. Mary’s Hospital in Duluth, Minnesota. Dennis was born on April 24, 1943 in Duluth to Ann and Eugene Maloney, who predeceased him. Dennis grew up in the West End of Duluth, spending time each year at Gillette Hospital in St. Paul after being diagnosed with polio at age 5. He graduated from Denfeld High School in 1960 and the University of Minnesota Duluth in 1966. After college, Dennis moved to International Falls where he fell in love: first with Rainy Lake and then with Renae Ludwig, whom he married on July 14, 1973. He worked as a probation officer in International Falls for more than 40 years and despite his physical limitations due to polio, enjoyed camping with his family, portaging into and fishing on remote Ontario lakes and “hunting” at the Hemstad shack. In 1985, he and Renae built their dream home on Gold Shores, Rainy Lake, where they spent summers until they began living there year-round in 2001. Dennis became bionic in 2001 as an early recipient of a cochlear implant, which restored his ability to hear and truly transformed his ability to communicate. He loved participating in cochlear implant research projects, flying to California, Arizona and Texas to help researchers advance the technology. He is survived by his wife, Renae; daughter, Pauli Evenson of East Grand Forks and granddaughters Ashley (Andrew Dault) Hilfer of Cloquet, Hayley (Michell) Horne of International Falls, and Madison Sawyer of Grand Forks, ND; daughter, Melissa (Ben Stromberg) Maloney and grandsons Quinn and Nico Stromberg of Duluth; son, Ryan (Katie Brennan) Maloney and grandson Charlie of Brooklyn, NY; great-grandchildren, Dayton and Penelope Horne of International Falls; special niece, Rachel Ludwig of International Falls; brother, Pat (Chelle) Maloney of Duluth; sister, Susan (Mike) Hughes of Duluth; and favorite pooch, Freya. Dennis donated to every organization that sent him a solicitation, so in lieu of flowers, please make a donation to an organization that is important to you. A memorial service will be held Monday, January 6 at 1:00 p.m. at Green-Larsen Mortuary in International Falls.

The family of Dennis Michael Maloney created this Life Tributes page to make it easy to share your memories.

Send flowers to the Maloney family.