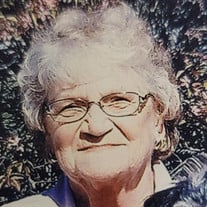 Devona (Von) Kay Hoppe 03/29/1941 - 11/16/2020 Devona died peacefully surrounded by her husband and children in Duluth, MN at the age of 79. She was born in Salol, MN on March 29, 1941 to Kindred (Ken) and Elvira (Vi) Lundeen. She grew up on the family farm in Skime, MN and graduated from Roseau High School in 1959. It was there she met Melvin Christianson, whom she married on June7, 1959, and the couple had three children. They lived briefly in Grand Forks, ND, then moved to International Falls in 1962. In her 20’s and early 30’s while raising her children, she was employed by Tastee Freeze where all the school kids from old Falls High and Backus went after school and were greeted by her smiling face, and by Ric Jig Tackle. She happily went to work every day, even tying jigs at home to make extra money for the family. She, also, picked thousands of night crawlers too, to help with the summer vacation fund. Her employment days ended when she was diagnosed with an aggressive and debilitating form of Rheumatoid Arthritis in her early 30’s. Mom never lived another day of her life without pain which became cripplingly devastating over the remainder of her life. But…to her family and those who had the privilege of knowing her knew she had a lioness heart. Through the pain, she had a smile for everyone and welcomed all who came through her door with an open heart, love and food if you were hungry. You may also get called a good-natured cuss word, a common term of endearment from “Von”. On April 11, 1990, Devona married the love of her life, Noel Hoppe, at the Little White Chapel in Las Vegas, NV. From that day forward, she literally danced through the pain like no one was watching, except Noel. They were the consummate couple in love. Only the love of family gatherings could outweigh the love she had for the open road westward with her love in their motorhome. You could hear the sunshine in her voice when she called form wherever the wind had taken them. She had found her Knight and he never once complained about the complexities and demands of her disease. She was truly and genuinely happy. Though she wasn’t physically able to make one final journey into the sun, she still sat around a few final campfires, a Busch beer cupped by gnarled fingers, smiling and laughing with her family and leaving lasting memories for us all. Devona was preceded in death by her mother and step-father, Elvira and Emil Lundin, and Father, Kindred Lundeen. She is survived by her husband, Noel Hoppe, sons, Randy Christianson of International Falls (Kelly Kellington of Whitehall, MI); and Mike (Ginger) Christianson of International Falls; daughter, Patty (Jim) Sauskojus of Grand Forks, ND; stepson Noel Jr. (Tiger) (Tina) Hoppe of New Richland, MN; granddaughters: Mandy (Dennis) McLeod of Winchester, CA; Ashlee (Cody) Mettler of International Falls, Stephanie Christianson of Seattle, WA, Brooke Sutherland of Grand Forks, MN, Bri Sutherland of Phoenix, AZ, Traci McFarland of New Richland, MN and Tonya (Jon) Bartsch of Geneva, MN. Grandsons: Cody Christianson (Karisa Michaud) of Fargo, ND, Jordan Christianson (Hannah Hansen) of Fargo, ND, Christian (Rylea) Kittelson of International Falls, MN, Carter Kittelson (Jennifer McBride) of International Falls, MN, and Trey (Megan) Hoppe of New Richland, MN and 13 great grandchildren. Mom, you will be missed so much more than words can say and loved even more. Now it’s time to rest, pain free at last. Due to Covid-19 guidelines, the family requests that only family and close friends attend.

The family of Devona "Von" Kay Hoppe created this Life Tributes page to make it easy to share your memories.

Send flowers to the Hoppe family.