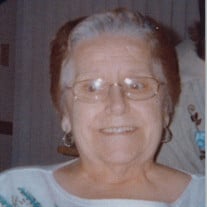 Dixie Lee Little, 82, of International Falls, Minnesota, died on Monday, June 3, 2019 at the Littlefork Medical Center. She was born on Valentine’s Day, February 14, 1937 to Ted and Ethel Dunnweber at International Falls. Dixie lived at 514 7th Street with her parents and two brothers. When she was twenty one she went to California, where she met her first husband, Robert Flick. She had two children with him and they divorced after eighteen years. She worked in different places before returning to Int’l Falls. Dixie loved to meet people and people she met enjoyed visiting with her. She graduated from Falls High School in 1955 beginning her career as a receptionist at the Koochiching County Welfare Department, she came back years later to resume her employment there in 1969. She loved her job and the people she worked with and the clients. A beautiful retirement party to celebrate her thirty years was given to Dixie at the Holiday Inn. She and Delbert Little were married in 1993 and retired at the same time. Dixie’s career began in 1955, working in several clerical positions. She worked at Dun & Bradstreet in Cleveland, Ohio, Gehl Bros. Manufacturing in West Bend, Wisconsin as a private secretary and various other positions in Torrence, CA and in Wisconsin. Writing poetry was her number one hobby; she also enjoyed shopping, listening to Bible services and working on jigsaw puzzles with Delbert during the long winters. They also loved going on trips and just going together on drives . Delbert and Dixie both enjoyed their computers. She was preceded in death by her parents and a brother, Charles William Dunnweber. Survivors include her husband Delbert Little of International Falls; son Robert Michael Flick of Thief River Falls, MN and daughter, Jeri Louise Flick of Int’l Falls; grandchildren; Larissa and Alyson; brother, Robert Granville (Ann) Dunnweber of Duluth, MN. Funeral services will be held on Thursday, June 6, 2019 at 11:00 am at the Evangelical Covenant Church. Visitation will be held one hour prior to the funeral. Interment will be at Oakley Cemetery, Littlefork, MN

The family of Dixie Lee Little created this Life Tributes page to make it easy to share your memories.

Send flowers to the Little family.