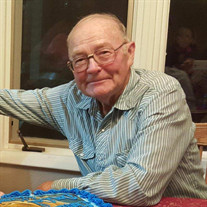 Captain Don Cooper Carey, 87, of International Falls, Minnesota, died on Friday, August 23, 2019 at Sanford Bemidji Medical Center. Captain Don Cooper Carey was born in Harlingen, Texas, and is the only boy in a family of three girls. Early in Don’s life, the Carey family moved to central Minnesota to become dairy farmers, and where Don was very active in 4-H club work. Don graduated from high school in Motley, Minnesota and then enrolled in the Bemidji State Teachers College. After two years of college, Don was drafted into the United States Army during the Korean War. While on active duty, he served with the 101st airborne division, the officer and airborne training schools at Fort Benning, the 82nd airborne division at Fort Bragg, the 2nd Infantry Division of Fort Lewis, with the Alaska Army Command at Fairbanks and as a student and instructor at the winter and summer schools at Fort Greely, Arkansas. After serving at several military stations in various leadership positions, Don left active duty and returned to Bemidji, Minnesota to finish his college education and secure a BS degree in education, and later secured his master’s degree from Moorhead State. It was in Bemidji where Don met the love of his life, Dorothy (Mikey) Henry, who was also attending college to become an educator. Upon graduation, Don was hired as a teacher at Falls High School in International Falls, Minnesota where he taught English, speech, coached speech and debate teams, directed numerous plays and musicals and formed the school’s first high school drama club. In the summer, Don served as a fishing guide on Rainy Lake. During his teaching career, Don continued to proudly serve his country in the Army Reserve Engineer Company B in International Falls, where he was promoted to Captain, served as Company Executive Officer and then as Company Commander for nine years. Don held leadership positions in numerous civic and benevolent organizations and continues to have memberships in his favorite civic and sportsmen’s clubs. He and his wife Mikey have six children, 12 grandchildren and numerous great grandchildren. Retirement years have been filled with spending time with Mikey and family members at their Birchdale area hunting cabin, gardening, fishing, hunting, trapping – and, of course, writing. It is Don’s passion for writing, and the love of the outdoors, which led to the publication of a very special book – Take Me to Your Hunting Cabin, which will be published soon in his memory. He was preceded in death by his father, Dale; mother, Florence; stepfather, Harley Eder; sister, Delwyn Chapin and sister, Aline Spencer. Don is survived by his loving wife Mikey, and his children, Steve (Annie) Carey, Teresa Waller, (Daryl), Don Jr. Carey, (Kathleen), Tom Carey (Patti), Shawn Mason (Bill), Chris Carey (Bev), and grandchildren: Ondrace, Nicole, Sarah, Luke, Ashley, Colleen, Bret, Ryan, Courtney, Aleisha, Myles, David, Mikayla, several great grandchildren and sister, Carolyn Nyberg. Funeral services will be held on Thursday, August 29, 2019 at 11:00 am at First Lutheran Church. A visitation will be held one hour prior to the funeral. Memorial gifts in memory of Don would be preferred to First Lutheran Church or the Rainy Lake Sports Fishing Club in lieu of flowers.

The family of Capt. Don Cooper Carey created this Life Tributes page to make it easy to share your memories.

Send flowers to the Carey family.