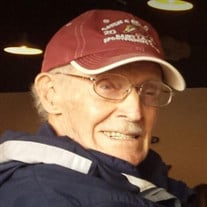 Donald Paul "Doc" Bryan, 98, previously of Blaine, Minnesota, died on Friday, January 15, 2021 at the Good Samaritan Society-International Falls. He was treated with TLC and loved his “Good Sam Family.” Don was born February 18, 1922 in Verndale, Minnesota to Glen and Helen. His family moved to Columbus Heights and he attended high school in Minneapolis. Don followed his brother Leroy to California where they worked riveting war-birds for consolidated aircraft. He was drafted into the U.S. Army Air corps in January 29, 1943. Don’s arm was crushed in the ball turret gun in his B-17. Don spent three months in an Army hospital and was honorably discharged on March 22, 1946. Don attended Northwestern College of Chiropractic and graduated March 24, 1950. Don and a classmate flipped a coin to see where they would practice. Don won and chose International Falls over Bemidji. Don loved International Falls, although a “city kid” he embraced the Northwoods. He owned several planes on floats and skis, had several wind sleds and was never one to pass up an adventure. Don built a shack on Duckfoot Island and we shared many Rainy Lake sunsets there. Don was president of the Lion’s Club from 1961-1962 and also a Masonic Lodge member. Don was very proud of his “big buck” he shot in 1956. It weighed 264 pounds dressed and placed first at the Rocky Teller sports show in Duluth. Don retired in 1977, sold their house at 928 2nd Street; bought an R.V., and became snowbirds. They lived on the beach in Mexico for many years before settling in at Patagonia, AZ. They lived their summers at the cabin at Bald Rock and loved their life there. Don’s first marriage to Patricia Tischer produced three children; Kathleen, Virginia, and Jeffrey. They divorced and Don married Marlene Rasmussen who had two children from a previous marriage; Mark Christianson and Nancy. From their marriage a son was born, that’s me, Douglas. Don is preceded in death by almost everyone he knew. He is survived by all children and several grandchildren. Their cherished granddaughter, Lisa Norstad, her two children, and a very special great-granddaughter Ava. Pat, Barb, and Jessie Porter were always part of our family and he loved him. Don will miss the Arizona sunshine, playing his mandolin with his friends, and catching walleyes at Bald Rock with me. “The proper function of man is to live, not to exist. I shall not waste my days trying to prolong them. I shall use my time.” -Jack London A Celebration of Life will be announced at a later date.

The family of Donald Paul "Doc" Bryan created this Life Tributes page to make it easy to share your memories.

Send flowers to the Bryan family.