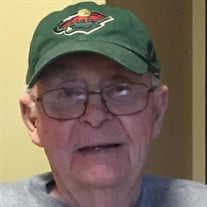 Donald E Crosby, 85, of International Falls, Minnesota, passed away on Monday, March 16, 2020 at the Good Samaritan Society in International Falls. Donald was born on September 17, 1934 in International Falls to parents, Richard and Margaret (Matheson) Crosby. He was united in marriage to the former Shirley Christiansen from Fort Frances in 1961. A young Don logged and drove truck for Promersbergers and worked on the DWP Railroad. He then spent most of his working life as a millwright in Boise Cascade where he retired in 1994. He was always busy and enjoyed having his own gravel hauling and delivery business. His love for heavy equipment - tractors, dump trucks, cement mixers, most machinery - was evident as he owned them all at one point or another. Don was an avid hunter and fisherman, and spent much time on the water enjoying fishing with his good friend Bob Lovell. He also spent numerous hours on Rainy Lake with his family on his pontoon boat. Don also loved working in the garage with Dave Backlund where they spent their time welding trailers, fixing engines, or whatever needed to be done in the neighborhood. He also spent many hours in arenas watching hockey - a sport he loved passionately. The last two years were spent at the Good Samaritan Society where he made a lot of good friends with fellow residents and staff. He was always helping whoever was in need. Donald was preceded in death by his parents, Richard and Margaret; brother, Paul Crosby; and sister, Virginia Kuhl. He is survived by his wife, Shirley Crosby; sons, Larry (Beth) Crosby, Steve (Jessica) Crosby; daughter, Shelley Crosby; four grandchildren, Tyler (Jane) Crosby, Chloe Crosby, Meggan Crosby, Brenna Crosby; and brother, Dave (Avis) Crosby. A Celebration of Life will take place at a later date this Spring. If so desired, the family would prefer memorials to the Good Samaritan Society, 2221 Keenan Drive, International Falls, MN 56649. Interment will be at Ericsburg Cemetery in Ericsburg, MN at a later date.

The family of Donald E. Crosby created this Life Tributes page to make it easy to share your memories.

Send flowers to the Crosby family.