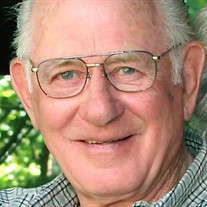 Donald Sherman De Raad passed away peacefully at his home in Roger's Corner on the Rat Root River with his family around him on January 10, 2020. Don was 87 years old. Don was born on April 17, 1932 in Badger, Minnesota, one of four children born to Albert and Myrtle De Raad. He attended school in Ranier, Holler, and International Falls, Minnesota. Don began work for the Minnesota and Ontario Paper Company in 1950 and in 1952 Don was drafted into the army during the Korean conflict. Don served in the 1343rd Combat Engineer Battalion which was part of the 11th airborne making bug out roads at the front lines for our troops to use. Don was honorably discharged in 1954 as a corporal and returned home to resume work in the insulite. That same year he married Marjorie Mae Hansen of Ray, MN. Together they had a son, Roger and a daughter, Sharon. Don retired after 42 years of service as a maintenance supervisor with Boise Cascade Paper Company in 1990. Don was a believer in his Lord Jesus and faithfully attended Full Gospel Fellowship. Don and Marge enjoyed life together, they could often be found on their farm taking care of Don’s horses, cows and other animals, raising crops or gardening, that was unless they were traveling near and far. And when they were not traveling they could be found out at their cabin in the woods on camp 90. Don was always living life to the fullest and enjoyed sleigh rides with his own team of Belgium horses, snowmobiling, four wheeling, motorcycling and hunting, but most of all he enjoyed doing all these things with his family and friends as he liked to make memories out of anything. Don was preceded in death by his parents, Albert and Myrtle De Raad; brother, Howard De Raad; two sisters, Lola Mae Mostad and Ada Marie Smith; one great-grandchild, Joshua Hostetter and a niece, Maxine (Mostad) Geis. Don is survived by his loving wife of 65 years, Marjorie Mae De Raad of Rogers Corner, International Falls; son, Roger (Sue) De Raad of Leola, SD; daughter, Sharon (Ron) Hostetter of International Falls, MN; four grandchildren, Derek (Laura) De Raad of Leola, SD, Cassidy Patch of Leola, SD, Ron Jr. (Sara) Hostetter of International Falls, MN, Blake Hostetter of Isanti, MN; sixteen great-grandchildren and his brother, Ray (Ardie) Vatnsdal of Roseau, MN. We the family are grateful of our nursing staff Stan, Hallie, Kaitlyn and caring staff from hospice for all your kindness and compassion not only to Don but also to his wife and family during this extended illness. And to all our extended family and friends who were there to support us all, your love and kindness was so appreciated. Don’s home going service will be held at Full Gospel Fellowship 1530-6th Avenue West in Int’l Falls on Saturday, January 18th at 1:00 pm with visitation one hour before and he will be laid to rest in the Ericsburg Cemetery following the service. If you wish to make a memorial in Don’s name, please make them to Full Gospel Fellowship.

Donald Sherman De Raad passed away peacefully at his home in Roger's Corner on the Rat Root River with his family around him on January 10, 2020. Don was 87 years old. Don was born on April 17, 1932 in Badger, Minnesota, one of four children... View Obituary & Service Information

The family of Donald Sherman De Raad created this Life Tributes page to make it easy to share your memories.

Donald Sherman De Raad passed away peacefully at his home in...