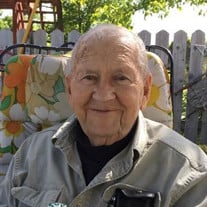 Donald Otto Fish, 92, of International Falls, Minnesota died early Monday February 10, 2020 at Rainy Lake Medical Center in International Falls. Don was born in Warroad, MN on February 14, 1927 to parents, Elsworth and Edith (Hathaway) Fish. He grew up in Warroad and before finishing high school, went on to serve in the United States Army during WWII. Don was united in marriage to Mary Ellen Heater in August of 1947 in Warroad. They moved to International Falls in August of 1950 where they have lived since. He completed his schooling in International Falls, receiving his diploma from Falls High School. Don worked for Boise Cascade until his retirement. He also did carpentry work. He enjoyed his carpentry, woodworking and working in his shop. He was a genuine “Jack of All Trades”. He was preceded in death by his parents, Elsworth and Edith; siblings, Bert Fish, Evelyn Thompson, Ethel Fish, Racheal Olson, Howard Fish, Janice Mostad, Larry Fish; son, Darwin Fish; grandsons, Rodger Fish, and Nick Schwab. He is survived by his wife, Mary Ellen Fish; sons, Duane (Mary) Fish of International Falls, Darrell (Rose) Fish of Littlefork, MN; daughter, Shelly Fish of Mexico; nine grandchildren; twenty-nine great-grandchildren; three great-great-grandchildren; and brother, Doug Fish of Parkers Prairie, MN. A memorial service with flag presentation will be conducted at Green-Larsen Mortuary on Friday, February 14, 2020 at 10:00 a.m. Visitation will begin one hour prior.

The family of Donald O. Fish created this Life Tributes page to make it easy to share your memories.

Send flowers to the Fish family.