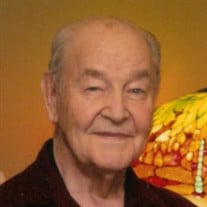 Donald Earl MacDougall, 87, of International Falls, Minnesota, died on Thursday, December 9, 2021 at the Rainy Lake Medical Center. Don was born on February 14, 1934 at Sioux Lookout, in Ontario, Canada. Don was retired, and was formerly employed by Boise Cascade, International Falls, and by Kansas Gas & Electric Company of Wichita, KS. He spent some time in the Canadian Air Force when he was a young man, then worked at a tourist resort near Dryden, Ontario, before moving to Wichita, KS. He married the former Irene Corrigan of Emo, ON on August 20, 1966 at Off Lake, Ontario. They made their home in Wichita, Kansas for seven years, where their son and daughter were born. In August 1973, they moved to International Falls to be closer to family. Don was preceded in death by his father, Phillip MacDougall; mother and step-father, Sybil and Pete Barnett; an infant sister; father and mother-in-law, Lawrence and Olive Corrigan; and brother-in-law, Gerald Sumner. He is survived by his wife of fifty-five years, Irene Anne MacDougall; son, Allan Earl (Amy) MacDougall; daughter, Julie Anne (David) Riemenschneider; eight grandchildren; one great-grandchild; brother, Bill Barnett; sister, Barbara Thomas; sister-in-law, Ruth; brother-in-law, Bill (Marilyn) Corrigan. A service will be held at a later date.

The family of Donald Earl MacDougall created this Life Tributes page to make it easy to share your memories.

Send flowers to the MacDougall family.