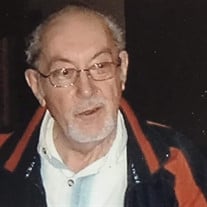 Donald Roderic MacKenzie, 89, of International Falls, Minnesota passed away on Saturday, October 19, 2019 at the Good Samaritan Society – International Falls. Don was born on January 7, 1930 in Eveleth, MN to parents Duncan and Lilly (Hoar) MacKenzie. On December 28, 1952 Don wed Mabel Angeline Paul in the Methodist Church in Coleraine, MN. He and Mabel lived in Virginia, MN until March of 1977 when they moved to International Falls. He retired from the Army National Guard after twenty-five years of service. Don worked the United States Post Office and retired as Post Master in February 1990. He loved the Minnesota Twins and was a big fan. He enjoyed camping and fishing at Red Lake, MN. Don loved all of his time with his family and relished picking on all of his wonderful grand kids and great-grandkids. He was always giving people a hard time and joking around. Don was preceded in death by his wife of fifty-five years, Mabel; sons, Roderic MacKenzie, Kenneth Mackenzie; and his parents, Duncan and Lilly. He is survived by his daughters, Donna (Denny) Lehtinen of Finland, MN, Cheryl Lickteig, Lori (Dr. Gary) Potter, and Sandy MacKenzie all of International Falls; fourteen grandchildren; fourteen great-grandchildren; sister, Norma Nekich; sister-in-law, Joyce Walls of Richfield, MN; and several nieces and nephews. A memorial gathering will be held at Green-Larsen Mortuary on Friday, October 25, 2019 from 1:00 to 3:00 p.m. A luncheon will be held at 4:00 p.m. until 6:00 p.m. at the Mark Jerstad Fellowship Hall, Good Samaritan Society. A private interment will be at Forest Hill Cemetery in International Falls. The family has such heartfelt appreciation for Deanna Kittelson, Robin Steele, Katlyn Alleman, Kelly Cheney, Teri Hoesli, Alex Tate, and all the staff at the Northwinds Assisted Living, also Stacey Napper and the staff of Dove Island at the Good Samaritan Nursing Home, and lastly the staff of Rainy Lake Medical Center and especially his adopted daughter, Debbie Dunn, and his granddaughter, Kyla MacKenzie.

The family of Donald Roderic MacKenzie created this Life Tributes page to make it easy to share your memories.

Send flowers to the MacKenzie family.