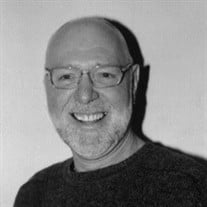 Donald Edward St. Pierre was born on Aug. 24, 1947 in International Falls. He died on Aug. 23, 2020, the day before his 73rd birthday, in Providence St. Vincent Medical Center in Portland, OR. His parents were Eva and Phillip St. Pierre, who preceded him in death. He graduated from Falls High School in 1965 and went on to University of North Dakota in Grand Forks for an English/Drama degree. He taught in various states and was active in community theaters everywhere he taught. He played leading roles and directed many plays throughout his career. Sometimes he wore all the hats when putting on a play. I remember trips though thrift shops with him in North Carolina looking for props. Donnie liked to travel and when he needed more adventures, he signed on to teach English and drama in South Korea. It was a real challenge to direct non-English speaking students in English plays. “They’re learning English through the plays,” he said. He often wrote scripts for the plays he produced. He loved using colorful masks in his plays and acquired an exquisite collection of them. With his love of adventure, while he lived in South Korea every break meant a trip to many European and Asian countries. While drinking coffee at an outside table in Thailand, Robin Williams sat down with him at his table. New York City was a favorite place to visit and was often included in his itinerary, fully booked with Broadway and off-Broadway shows. When I visited New York with him, we quickly dined between shows. My favorite was Lion King, but I didn’t like Glen Gary Glen Ross. Donnie lectured, “The acting was superb. Alan Alda has a great stage presence.” When he decided to come back to the United States, he chose to reside in Portland, OR, joining some friends he’d met in South Korean, taking advantage of many cultural opportunities. Of course, he soon was involved with theater. After months of treating cancer, he remained hopeful, saying, “I’m not down or depressed. I just got to go through it.” He looked forward to emerging into life again. But MRSA knocked him down with pneumonia. Surviving him are his sister, Phyllis Karsnia, brother-in-law Leo Karsnia, nephews Allen (Kip) Karsnia, nieces Sherry Karsnia (Jim) Larson and Jayne Karsnia (Nathan) Ellegard. Grand nieces and nephews are Erin Karsnia (Kevin) Moore, Jackie Karsnia, Kelly Karsnia, Adam Larson and Brian Robinson, Jenna and Luke Wright, Tyler and Stephanie Ellegard. In addition are eight great-grand nieces and nephews. Due to the Covid-19 pandemic, there will be a small family service.

Donald Edward St. Pierre was born on Aug. 24, 1947 in International Falls. He died on Aug. 23, 2020, the day before his 73rd birthday, in Providence St. Vincent Medical Center in Portland, OR. His parents were Eva and Phillip St. Pierre, who... View Obituary & Service Information

The family of Donald Edward St. Pierre created this Life Tributes page to make it easy to share your memories.