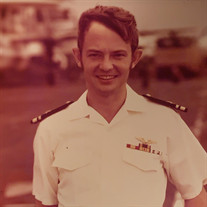 Edward Neil Anderson, 73, of International Falls, Minnesota, died on Thursday, January 2, 2020 at his home. Ed was born in Littlefork, MN in 1946 and graduated from Falls High School in 1965. In his younger years Ed spent much of his time on Rainy Lake. He was a member of the Rainy Lake Water Ski Club and the Ham Radio Club. He was a gifted musician and played various instruments such as keyboard, piano, and trumpet. Ed performed in several bands throughout his life, including the original Dirty Dozen and the Chessmen. He graduated from UMD in 1970 with a degree in Geology. Ed served in the military as a Lieutenant in the US Navy from 1971-1975 as an Air Intercept Controller Supervisor, stationed on the USS Saratoga. During his time in Vietnam he was awarded the Navy Commendation Medal, Air Medal, Navy Unit Commendation, National Defense Medal, One Star for Vietnam Service, Vietnam Campaign Medal, and a Republic of Vietnam Air Gallentry Cross with Wings. His aviator call sign was “Mole”. Ed was a retired Master Electrician and a former member of the International Brotherhood of Electrical Workers. Not only was he a talented electrician, but also welder, mechanic, and carpenter. Eddie was the kind of guy who would help anyone fix anything. An avid outdoorsman, he enjoyed boating, fishing, hunting, and camping. Ed was fascinated with trains and model railroads and was also an avid reader and military historian. Ed loved his morning coffee time at Super One Foods. Edward is preceded in death by his parents, Edward and Dorothy Anderson; brother, Don Anderson; Aunt, Lucille Anderson, Uncles, Carl “Red” Anderson, Charlie Anderson, Harry Erickson, and Lauren Erickson. Ed is survived by daughters, Michelle Stapleton and Tabitha (Kevan) Caswell; grandchildren, Olivia, Owen and Carter Stapleton; sisters, Kris (Charles) Helleloid and Brenda (Chad) LeDuc; nieces, Karin (Ty) Erickson and Jaime LeDuc, nephews, Lars (Tara) Helleloid and Charlie (Heather) LeDuc; Aunt, Charlene Erickson and cousins, Wayne and Sheri Erickson, and Joni Feaver; good friend and “accomplice”, Ladd Kocinski. As per Ed’s request, no service will be held. Gifts in memory of Ed Anderson can be made to the VFW Post 2948 or Backus Community Center for the Performing Arts Program.

Edward Neil Anderson, 73, of International Falls, Minnesota, died on Thursday, January 2, 2020 at his home. Ed was born in Littlefork, MN in 1946 and graduated from Falls High School in 1965. In his younger years Ed spent much of his time... View Obituary & Service Information

The family of Edward Neil Anderson created this Life Tributes page to make it easy to share your memories.