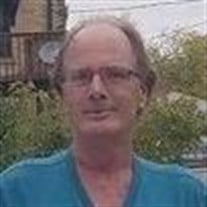 Edward John Peterson, 53, of International Falls, passed away unexpectedly on Friday, January 25, 2019 at Essentia Health, Duluth, MN. Ed was born July 28, 1965 in Frankfurt, Germany. He received his GED in International Falls. His primary residences were in International Falls, but moved to Hampton, MN in 1989, where he was married in 1991, and then moved back to the Falls in 2001, where he'd been most of his life. Ed worked as a general laborer, for the majority of his life with his most recent job being at ODC of the Falls. He enjoyed many simple things in life, to include his favorite color, blue. His favorite thing to do was probably fishing and just enjoying the day. He took many joy rides to check out the scenery. Ed enjoyed the beaches and camping when it was warm. He was a card player to include phase 10 and rummy, and really enjoyed visiting his family. Ed was a very easy going, and easy to get along with guy, always willing to help anyone who asked. Ed was preceded in death by his parents, Charles and Ella Peterson; and his sister Patricia Ann Blassingame. Ed is survived by his daughters, Ashley (Josh) Hinz of Baudette, MN, and Brittany Peterson of Dennison, MN; Brothers, Jerry (Tarra) Peterson of Fort Frances, Ontario, Clifford (Emma) Peterson of Fayetteville, Arkansas; Sister, Kathy (Don) Dolph of Fort Frances, Ontario; Niece and Nephew, Christal (John) Dolph of Fort Frances, Ontario, and Donald Dolph of Thunderbay, Ontario; Roommate and best friend Lori Nelson of International Falls; and 5 great nieces and nephews. Memorial services will be held on Monday, February 11 at 1:00pm at the Evangelical Covenant Church, Int'l Falls. There will be a luncheon to follow.

The family of Edward Peterson created this Life Tributes page to make it easy to share your memories.

Send flowers to the Peterson family.