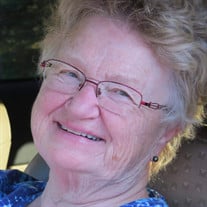 Elaine A. Goulet "Nana" Elaine, Mom or Nana, 78, a resident of the International Falls area passed away peacefully at home on Friday, January 8, 2021. 1 Corinthians 13: 1-13 Elaine was born in the small farm house of her grandparents near Morris, Minnesota on May 3, 1942. She was an only child who grew up with her mother, Ardis, grand parents, Ella and Silas Kjeldahl and Aunts and Uncles out in the wide open farm fields of south central Minnesota. At a very young age, while learning the ropes of life she began to cook, clean and care for other people while tending the many sheep on their farm. She earned money by trapping muskrats and pocket gophers to help buy her cheerleading shoes for school. While wearing those shoes she met the man of her dreams, she told her friend that one day she would marry that man.... that man was Keith Goulet. As she was in 4-H, so was Keith, in another county, they began dating. The two became one on September 17, 1960 at Assumption Catholic Church in Morris. They began their lives together for the first ten years in Alexandria eventually moving to International Falls in the fall of 1971. Elaine was now the mother of five children and busy 24-7! She babysat other children while being a homemaker. Elaine also learned and loved to play volleyball with many lady friends. As time went on she played softball with her three daughters as well. She absolutely loved attending her children's and grandchildren's sporting events. The kids always knew she was there as she was quite a vocal cheerleader! During this time Elaine was also very busy as Head Cook in the Falls school system, tied fishing lures for a local tackle company, coordinated and managed the outstandingly successful Harvest Suppers at St. Thomas Catholic Church each fall. For two months in the summer on an island on Rainy Lake, she worked endlessly cooking for Camp Koo-chi-ching's 200 kids--three meals a day. When there was time Elaine very much enjoyed weekend camping trips and catching walleyes. She loved taking pictures, working in her vegetable and flower gardens, going to the hunting shack, 4-wheeling, visiting around the bonfire while burning her marshmallows and most especially watching the birds at the feeders. She was an excellent marksman and could process and preserve what she harvested. While traveling to visit family and friends, across the country and around the world, there always seemed to be time to play cards, which pleased her greatly.... "May I anyone?" Elaine is survived by her husband of 60 years, her mother, all five of her children and their spouses, nine grandchildren and their spouses, eight great-grandchildren and many grand pets. In lieu of flowers - Mom's final wish is that you feed and watch the birds in your yard, smell the flowers in the gardens and enjoy the little things that make you smile!

The family of Elaine Ardis Goulet created this Life Tributes page to make it easy to share your memories.

Send flowers to the Goulet family.