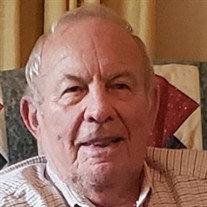 Frank William Watkinson, 90, of International Falls, Minnesota, died on Wednesday, April 28, 2021 at Sanford Bemidji Medical Center. He was born on October 12, 1930 in Virginia, MN to parents, Harry and Mary Watkinson. Frank grew up in Virginia, and as a teenager, at Rocky Point Resort on Lake Kabetogama, it was a family business, and he was a fishing guide. In High School he completed a mechanics course and was a goalie on the Virginia hockey team, he also played semi-pro hockey in Eagle River, WI. Frank was a Seabee in the United States Navy, serving from 1953 to 1955. He helped construct Subic Bay. He was married on September 1, 1956 to Shirley Ann Siiro, they lived in North Dakota with 2 young children while he completed his degree in Electrical Engineering, a GI Bill and hockey scholarship was used to accomplish this task. After graduation he was hired by Mando (Boise) in International Falls and worked there his entire career. He loved working as an Electrical Engineer. Frank and Shirley raised 7 children and he shared his passion for the outdoors, hunting, and fishing. Many family vacations were spent at the family cabin on Lake Kabetogama. His beloved Shirl passed away in 1999, Frank has said that she was a classy lady and very strong woman. He was reunited with his teenage friend Gerry Kowalczyk, he took really good care of her and they had a lot of fun together. During retirement years he volunteered his time at the church as an usher, adoration, Knights of Columbus, the care center, and gave rides for out-of-town appointments for anyone who asked. Frank has been a member of the St. Thomas Catholic Church for the last 60 years. Frank was a generous man who always put others first. His faith was strong and he knew that God was in charge. He was preceded in death by his wife, Shirley Watkinson; and parents, Harry and Mary Watkinson. Frank is survived by his sons, Frank Watkinson of Bismark, ND, John Watkinson of International Falls; daughters, Mary Kayfes of Vancouver, WA, Jean Inmon of Virginia, MN, Theresa (Raoul) Warzecha of Becker, MN, Patsy Watkinson of Cohasset, MN, Annette Watkinson of International Falls; nine grandchildren and 10 great-grandchildren. Visitation will be held at Green-Larsen Mortuary on Tuesday, May 4, 2021 from 5:00 to 7:00 p.m. Funeral mass will be conducted at St. Thomas Catholic Church on Wednesday, May 5, 2021 at 11:00 a.m.

The family of Frank William Watkinson created this Life Tributes page to make it easy to share your memories.

Send flowers to the Watkinson family.