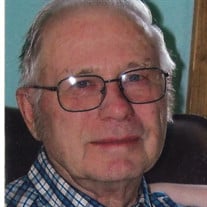 Fred Leroy Anderson, 93, of International Falls left this world and entered into the presence of Jesus on February 14th at the Rainy Lake Medical Center. Fred was born November 26, 1926 at Blackduck, Minnesota to Alfred and Ida Anderson. He joined the Army after graduating from high school and served in the Philippines until the end of the war. He married the former Mildred Chamberlin and together they had two children. In 1972 he married Rita Wilson. He worked in the Int’l Falls area as a milkman, both home delivery and retail. He enjoyed participating on area bowling teams, fishing, and spending time at his cabin in Canada. He was a faithful and active member of his church, St. Paul’s Lutheran. He was preceded in death by his parents, Alfred and Ida; his step father, Robert Bucklin; sister June Bucklin and niece Michelle Bucklin. He is survived by his loving wife Rita, son Doyle (Ila) Anderson of the Falls, daughter Debra (Bruce) LaVigne of the Falls, daughter, Rose (Jeff) Johnson of Williston, ND stepson John (Teena) Wilson of the Falls, stepdaughters Carol (Pete) Anderson of the Falls, and Kathy (Doug) Galusha, also of the Falls. His surviving grandchildren are Jackie (Jason) Hovis, Laura (Luke) Zika, Benjamin LaVigne, Courtney (Luke) Smith, Paul (Victoria) Galusha, Bryan Johnson, Kate (Jayson) Wade, Aaron Johnson, and Aleena Wilson. He had 15 great grandchildren. Also surviving are his brothers Richard, James and Ralph Bucklin. Funeral services will be held on Tuesday, February 18, 2020 at 11:00 am at St. Paul’s Lutheran Church with military rites. A visitation will be held one hour prior to the funeral. In lieu of flowers, the family would prefer memorials to St. Paul’s Lutheran Church.

Fred Leroy Anderson, 93, of International Falls left this world and entered into the presence of Jesus on February 14th at the Rainy Lake Medical Center. Fred was born November 26, 1926 at Blackduck, Minnesota to Alfred and Ida Anderson. He... View Obituary & Service Information

The family of Fred Leroy Anderson created this Life Tributes page to make it easy to share your memories.