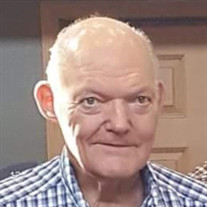 Frederick Russell Lane Sr., 81, of International Falls, Minnesota, passed away on Wednesday, November 3, 2021 at the Rainy Lake Medical Center. Fred was born on October 5, 1940 in Grand Rapids, Minnesota to Russell and Louise Lane. He graduated high school in 1959 and enlisted with the U.S. Army and served four years with the military police while stationed in England. He worked at Hanna Mining Co. in Grand Rapids and then moved to International Falls and began his career at Boise Cascade until his retirement in 1999. He was united in marriage to Brenda Wilson on November 17, 1967. Fred was a man of many talents. He was a good friend to all who knew him. He was kind, caring, and loved a good joke. He took great pleasure in hunting, fishing, going for rides in the woods, and was especially known for his garden and cooking skills. Fred was predeceased by his parents, his wife, Brenda; and brother, Jim Lane. He is survived by his sister, Charlene (Dan) Garner; brother, David (Jenny) Lane; sister-in-law, Donna Lane; children, Annette Lane, Frederick Lane Jr., Jacqueline (Lance) Lane-Fisher, and Bruce (Bonnie) Lane; grandchildren, great-grandchildren, nieces, nephews, and his special friend, Marjorie Toninato. A memorial service will be held on Friday, November 19, 2021 at 11:00 am at Green-Larsen Mortuary in International Falls, MN. Following the service, interment will be at Forest Hill Cemetery in International Falls. A luncheon will be held at the VFW from 12:00 pm-3:00 pm.

The family of Frederick Russell Lane Sr. created this Life Tributes page to make it easy to share your memories.