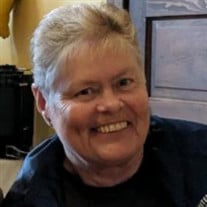 The family of Gail Lorene “Sjobie” Sjoblom Shipley, age 67, are saddened to announce her passing on March 9, 2020 at Rainy Lake Medical Center in International Falls, MN. Gail courageously fought her battle against cancer and passed peacefully with family at her bedside. Gail was born March 27, 1952 to Sven and Ethel Sjoblom in International Falls. She was the youngest of 4 children. She was raised in Ericsburg, MN and attended Falls High School and Rainy River Community College in International Falls. She was a natural athlete and participated in sports such as track and field, and later enjoyed being a part of local softball teams. Gail served in the Army Reserves. She greatly enjoyed spending time with family, friends and former classmates, and especially adventures with life-long friend Jodell Doucette. Gail was united in marriage to David Shipley on April 5, 1974 until his passing in 2013. Gail worked as a bus driver and paraprofessional at Falls High School; and also as a caregiver and program director for many years at REM homes until she retired in 2015. Gail was an energic, hard working woman who brought joy to others around her. She enjoyed spending time with friends and especially exploring with special friend, John Sirotiak. She also shared how much she enjoyed coffee and spending time with her friends at Coffee Landing. She held a special place in her heart for her family, especially her grandchildren Carissa, Nikki, Kailey and Ashley Shipley, Jessica (Aaron) Leviet, Jared (Alisha) Shipley, Ahmed, Domonic and Dartanian Prescott, and great-grandchildren Chesney and Kelsey Leviet. Gail was preceded in death by her husband, David Shipley; her parents, Sven and Ethel Sjoblom; her grandparents, Gustav and Britta Sjoblom and Sigfurd and Agnes Haglund; father and mother-in-law, James Shipley and Lillian Shipley; siblings, Beverly and husband Archie Bzdok, Benard and wife Valerie Sjoblom; sister-in-law, Viola and husband Dale Shinn; brother-in-law, Rush Johnson, and brother-in-law, Bud Morrell. Gail is survived by her children, Lance Shipley, and Justin (Shailynn) Shipley; step children, David Wayne, Wesley, James (Lisa), Clint Shipley and Christie (Rob) Prescott; brother, Duane (Tammy) Sjoblom; sister, Teri (Bruce) Zahara; brother, Allan Esklson; sisters-in-law, Eugenia Johnson and Mary Morrell; brother-in-law,Dan Shipley; grandchildren, and great-grandchildren; and numerous cousins, nieces and nephews. A Celebration of Life will be held on March 16, 2020 at the Elk’s Club from 3-7 pm. Interment will be held at Ericsburg Cemetery at a later date. Gail’s wish is that you bring your smiles and your memories to share as we celebrate her life. Memorials may be made to the Community Cancer Walk Gas Card Fund c/o Chemotherapy Department at Rainy Lake Medical Center, 1400 Hwy 11 International Falls, MN.

The family of Gail Lorene Shipley created this Life Tributes page to make it easy to share your memories.

The family of Gail Lorene “Sjobie” Sjoblom Shipley, age 67, are...

Send flowers to the Shipley family.