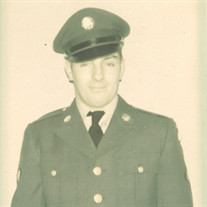 Garnet Melvin “Tater” Tate, 81, of International Falls, Minnesota, died on Thursday, February 28, 2019, at his home. Garnet was born on August 25, 1937 in Fort Frances, Ontario, Canada, and later moved to International Falls. He served in the U. S. Army for three years, stationed in Fort Leonard, Missouri, Anchorage, Alaska, and Fort Bellevue in Washington D.C. Garnet was united in marriage to Sheila Lea Dickson on March 17, 1960. He was a papermaker for Boise Cascade paper mill in International Falls. Garnet was a hard worker with a deep love for his wife and family. He enjoyed traveling with them and making beautiful stained glass with his wife. He loved hunting, farming, and was a Boy Scout leader and foster parent for many years. Garnet was a very generous man who would give you the shirt off his back to help you. He was preceded in death by his mother, Alma Lena Tate; twin brother, Gilbert; brothers, Earl, and Alvin; sister, Drewulla; and the love of his life, his wife of fifty-eight years, Sheila Tate, who died in January 2018. Garnet is survived by his sons, Robert (Kristina) Tate, Todd Tate; daughters, Michele Tate (Brad Larson), Melissa Tate (Mike Larson); fourteen grandchildren; four great-grandchildren; brothers, Dave Tate, Cyril Tate; and sister, Grace (Robin) Bowes. Funeral services with military rites will be held at The Church of Jesus Christ of Latter-Day Saints on Saturday, March 9, 2019 at 11:00 a.m. Visitation will be one hour prior to the funeral. Interment will be at Forest Hill Cemetery in International Falls.

The family of Garnet Melvin "Tater" Tate created this Life Tributes page to make it easy to share your memories.

Send flowers to the Tate family.