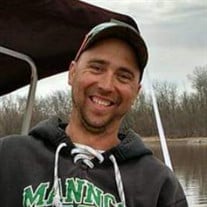 Gary William Hart, 37, of International Falls, Minnesota, died on Sunday, January 31, 2021. Gary was born on May 25, 1983 in International Falls to parents, Raymond and Karla (Qualley) Hart. He was a Heavy Equipment Operator for Koochiching... View Obituary & Service Information

The family of Gary William Hart created this Life Tributes page to make it easy to share your memories.

Send flowers to the Hart family.