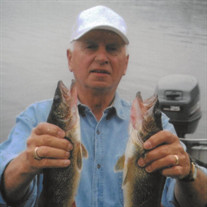 Gerald Gordon Arason, 89, of International Falls, Minnesota, died on Thursday, August 5, 2021 at Rainy Lake Medical Center in International Falls. Born to Sig and Alvena Arason on July 15, 1932. He was the youngest of four brothers, Walter, Lawrence, and Rueben. Jerry attended school in Fort Frances, Ontario. He joined the Candian Army Reserve at fifteen years old where he served as a gunner in the artillery from 1947 -1949 after he fibbed a little about his age. In his teen years he had many different jobs, but his favorite was the summer he spent fighting forest fires in Quetico Park, Ontario. In the 1950s, he moved to the United States to help his father at Arason’s Body Shop. Jerry registered for the draft when he came to the United States and was drafted and served in the Korean War from 1951-1954. During his service, he was stationed in Nuremburg, Germany where he received his American Citizenship. He was extremely proud of his dual citizenship and service to both countries. He returned to the United States to work with his father and brothers at Arason’s Body Shop which he eventually purchased and operated with his own sons. Jerry spent 65 years working in the Body Shop that his father started in 1932. He spoke often about the multiple generations of families that he worked for and was very proud to serve the borderland for so many years. While working for Arason’s Body Shop in March 1960, Jerry rescued a young lady named Dolores Dahl who had put her car into a snowy ditch. They were married October 8, 1960. To this union, came three sons, Douglas Gordon, Thomas Sigurd, and Kristopher George. Jerry enjoyed many outdoor activities including boating, fishing, hunting, and gardening. He also enjoyed coffee and Texas Hold ’em with his friends. His greatest joy was spending time with his family. He especially enjoyed time with his grandchildren. He attended many of their sporting events in addition to teaching them how to fish, feed the chipmunks and “whale dive” in Rainy Lake. Jerry was a member of the VFW, American Legion, Canadian Legion, Elks, Rotary, and First Lutheran Church. He was also very proud of his Icelandic heritage and spoke of that often. Jerry was preceded in death by his parents, Sigurd and Alvena; brothers, Walter, Lawrence, and Reuben; in-laws, Edith and George Dahl; sisters-in-law, Beulah Arason, and Darlene Arason. He is survived by his wife of 60 years, Dolores; three sons, Douglas, Thomas, and Kristopher (Terry); three grandchildren, Hannah, Jake, and Logan; two brothers-in-law, James (Lillian), Philip; one sister-in-law, Lucille Cayou; and several nieces and nephews. Funeral services will be conducted at First Lutheran Church on Friday, August 13, 2021 at 1:00 p.m. with Rev. Andy Berry officiating. A livestream of the service will be available through the First Lutheran Church website, or click the link http://www.firstlutheranifalls.org/livestream.html. Interment will be at Riverside Cemetery in Loman, MN. If so desired, in memoriam donations would be preferred to First Lutheran Church, Bethany Evangelical Lutheran Church in Loman, or to the donor’s choice.

The family of Gerald Gordon Arason created this Life Tributes page to make it easy to share your memories.

Send flowers to the Arason family.