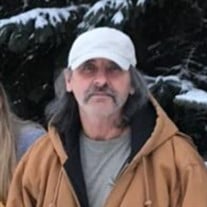 Gerald Bahr, 70, of International Falls, Minnesota, died on Saturday, April 25, 2020 in Ray MN. He was born on September 18, 1949 in International Falls to Raymond and Mildred Bahr. Jerry was in the middle of 6 children; Raymond Jr., Janice, Sharon, Jimmy and Donna. Jerry grew up in Int’l Falls and went to school until the 8th grade. He worked as a painter for years and traveled all around including several years in Colorado. Jerry was one of those guys that could fix almost anything and loved to tinker on his cars and going out to his buddy Bob Harala’s farm. Jerry and his niece were especially close, and he was known as Uncle Jerry to everyone they came into contact with, and he always was there to help with any project or just a cruise around town. Jerry was known for his easy-going attitude and he liked to give all his nieces and nephews heck whenever he could. He taught us to be kind because you do not know what the other person is going through and to laugh whenever you get the chance. Jerry is preceded in death his brother, Raymond Bahr Jr., and his parents Ray and Millie Bahr. Jerry is survived by his sisters, Sharon Everett, Janice Hell, Donna (Lawrence) Bellamy; brother, Jimmy and sister in law Abby Bahr; nephews, Greg Bahr, Kevin (Tina) Bahr, Michael (Laura) Bahr, Jerry Bahr, Trinity Hell, Jeremy (Dustin) Hell, Josh (Dan) Hell; nieces, Melanie (Mike) Busch, Christy Riveria, Sheila (Chad) Thetreault; great-nieces and nephews, Austin Geiselhart, Brinkley Busch, Dayton Busch ,and Armani and Romeo Riveria. He also is survived by his best friend Bob Harala. A memorial service will be held at a later date.

Gerald Bahr, 70, of International Falls, Minnesota, died on Saturday, April 25, 2020 in Ray MN. He was born on September 18, 1949 in International Falls to Raymond and Mildred Bahr. Jerry was in the middle of 6 children; Raymond Jr., Janice,... View Obituary & Service Information

The family of Gerald Francis Bahr created this Life Tributes page to make it easy to share your memories.

Send flowers to the Bahr family.