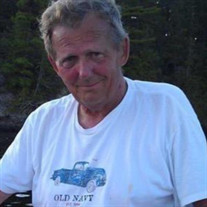 Gerald “Jerry” Bruce Franzen, 74, of International Falls, Minnesota, died on Wednesday, June 3, 2020 at the Good Samaritan Society – International Falls. Jerry was born on August 31, 1945 to John “Jack ”and Dorothy (Erickson) Franzen at the Falls Memorial Hospital in Int’l Falls, MN. He was welcomed home by his big brother Neil. At the age of one Jerry contracted the Polio Virus and spent much of his childhood in and out of hospitals. He was a poster child for the March of Dimes. Jerry never let his disability slow him down. As a child you would see him chasing after his brother and neighborhood friends on his crutches. His brother and friends never minded waiting for him because they knew he would let them barrow a crutch to knock down the best apples out of the top of the neighbor’s tree. Jerry had a love of music his whole life. Aa a child he took piano lessons and learned to play the guitar. As young adult he joined a band with his good friend Chuck Lepper and played at the local bars. His love of music lead him to a career in Radio Broadcasting. Jerry was a graduate of Hibbing Community College where he studied Public Broadcasting and Communications. He worked in radio for over fifty years on local stations including CFOB and KGHS. Many locals Looked forward to listening to him every morning on the radio and referred to him as “The Voice of the Northland” He retired from KGHS in March of 2017 and his voice has been missed since by many northlanders and tourists. Nothing meant more to Jerry than family and community. After graduating from college in 1966, he married his first wife, Judy Good. Jerry and Judy had three children together, two sons and a daughter. On August 9th of 2003, Jerry married his soulmate, Connie (Woodbridge) Holt. Along with a new wife, Jerry gained a very large family. Jerry adored his children and grandchildren and was known to brag about their accomplishments to anyone who would listen. He loved watching the grandchildren play, taking them fishing, giving them rides in the trailer of his lawn tractor and building gingerbread houses. Along with family and music, Jerry enjoyed fishing Rainy Lake, watching Vikings football, playing cribbage, poker and playing pool. He was a former member of the International Falls City Council, the Koochiching County and International Fallls Zoning Commissions and also a member of the Borderland Alano Club. Jerry was preceded in death by his parents, brother Neil Franzen; granddaughter, Brianna Franzen and beloved black lab, Cooper. Jerry is survived by his wife, Connie Mae Franzen; sons, Tim (April) Franzen of Ozark, Alabama, Tony (Kristin) Franzen of Hanover, Minnesota, and Sean (Kelly Jo) Holt of Coon Rapids, Minnesota; daughters, Tammy (Earl) Elmore of Newton, Alabama, Bonnie (Jerry) Bragg of Maple Grove, Minnesota, Debbie (Chris) Peters of Zimmerman, Minnesota, Charlene (Bill) Tomczak, Cherrie (Jesse) Belanger of Int’l Falls, Minnesota, Cindy (Jake) Roerig of Fridley, Minnesota and Heather Dalton of Int’l Falls, Minnesota; Thirty-three grandchildren and eight great-grandchildren and his dogs, Daisy and Tucker. The family will hold a Celebration of Life on May 29, 2021 at the Ranier Community Building on Saturday, May 29th, 2021. Memorials may be directed to 2914 2nd Avenue East, Int’l Falls, MN 56649.

The family of Gerald "Jerry" Bruce Franzen created this Life Tributes page to make it easy to share your memories.

Send flowers to the Franzen family.