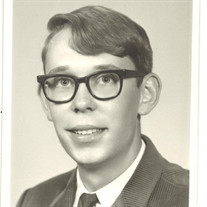 Gerald Lee Kantor, 69, of International Falls, Minnesota, died Thursday, October 24, 2019, at his home. Jerry was born February 25, 1950, in International Falls to parents, Carl and Lorraine (Rolfe) Kantor. He attended St. Thomas School and Falls Jr. and Sr. High Schools, graduating in 1969. Jerry attended Rainy River Community College prior to enlisting to the U.S. Navy. After returning from the service, Jerry worked as a custodian in Boise Cascade, for his father at the family business, Kantor Electric, and for ODC until his retirement. Jerry had a love for the outdoors. He enjoyed walking, riding his bicycle, hunting, and fishing. He loved cooking and was known for his made from scratch, pumpkin pie which he made direct from the Jack O Lanterns. He also loved watching football and his favorite team was the Bronco’s. He had a passion for music, and liked following the news and reading. He was known for his kindness, generosity and the best laugh ever. His greatest loves were his children and grandchildren. He was so very proud of them. Jerry was preceded in death by his father, Carl. He is survived by his son, Gerald L. Kantor Jr.; daughter, Christina Kantor; grandchildren, Talon Kantor, Steel Galusha; former wife and good friend, Alice Cupp; mother, Lorraine Kantor; brothers, Jeffery C. Kantor (Diane), Joseph C. Kantor; sisters, Natalie Kantor-Frank (David), Sarah Arch (Howard); and numerous nieces and nephews. A memorial mass will be conducted at St. Thomas Catholic Church on Friday, November 1, 2019 at 11:00 a.m. Visitation will be conducted one hour prior to service time. A private family interment will be at Ericsburg Cemetery in Ericsburg, MN.

The family of Gerald Lee Kantor created this Life Tributes page to make it easy to share your memories.

Send flowers to the Kantor family.