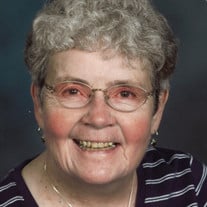 Gertrude Jeannine "Trudy" O’Connell, 85, of International Falls, Minnesota, died on Thursday, January 9, 2020 at the Good Samaritan Society-International Falls. Trudy was born in Kelly Lake, MN on February 20, 1934 to parents Fred and Harriet (Dunn) Gibson. On August 18, 1973 she was united marriage to Joseph Francis O’Connell. Over the years, she and Joseph were privileged to adopt three daughters. She taught school at St. Thomas Catholic School under Sister Jean Therese. Trudy and Joe had been full-time RVer’s since 2001, spending winters in Apache Junction, AZ and summers at Breezy Point, MN. They were happy to travel together after retirement. She was preceded in death by her parents; husband, Joe; brother, Fred Gibson. Trudy is survived by her daughters, Anita (Leo) Dugas of International Falls, Kathleen Eisel of Superior, WI, Sara (Kevin) Flynn of Duluth, MN; seven grandchildren; and fifteen great-grandchildren. Funeral Mass will be conducted at St. Thomas Catholic Church on Wednesday, January 29, 2020 at 11:00 a.m. Holy Rosary will begin at 10:00 a.m. prior to the service. If desired, the family would prefer memorials to Valley of Our Lady Monastery, E11096 Yanke Dr, Prairie Du Sac, WI 53578, or at build.valleyofourlady.org/participate.

The family of Gertrude Jeannine "Trudy" O'Connell created this Life Tributes page to make it easy to share your memories.

Send flowers to the O'Connell family.