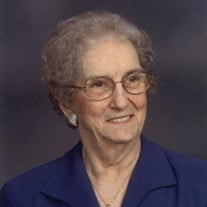 Grace Edna Watson, 98, of the Littlefork Care Center in Littlefork, Minnesota passed away Monday, December 9, 2019 at Rainy Lake Medical Center in International Falls. She was born on June 13, 1921 in Barwick, Ontario, Canada to parents Oliver and Ethel Lovell. Grace worked at Jim’s Eat Shoppe until her marriage to Rowland G. Watson on June 8, 1941. Together they owned and operated Watson’s Café and Gas Station. She was Postmistress for the Ericsburg Post Office for twelve years until her retirement in 1977. She had a lot of energy and had an open door for cinnamon rolls, and her delicious restaurant food. Grace was a “helpmate” for her husband who contracted polio in the 1950’s. She sold eggs and did laundry to keep an income with two small children at home. Grace was preceded in death by her parents, Oliver and Ethel Lovell; husband, Rowland Watson; brothers, Walt and Fred of California, Bill of Ray, MN, and Bob of Ericsburg; son-in-law, Pete Vartanian; one grandchild; and one great-grandchild. She is survived by her son, R. Wallace Watson (Terry); daughters, Joyce Vartanian, and Cathy (Glenn) Davis; eleven grandchildren; twenty great-grandchildren; and sister, Ethel Monroe of Texas. Funeral services will be conducted at the First Baptist Church on Saturday, December 14, 2019 at 1:00 p.m. Interment will be at Ericsburg Cemetery in Ericsburg. Memorials would be preferred to the First Baptist Church, 115 Shorewood Drive, International Falls, MN 56649.

The family of Grace Edna Watson created this Life Tributes page to make it easy to share your memories.

Grace Edna Watson, 98, of the Littlefork Care Center in Littlefork,...

Send flowers to the Watson family.