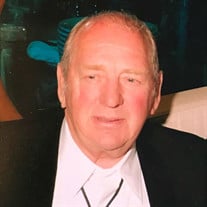 Graham Lloyd Keeney, 83, of International Falls, Minnesota, died on Monday, April 5, 2021 at Rainy Lake Medical Center. He was born in Littlefork, MN to Ivan and Norma Keeney of International Falls. Graham graduated from Falls High School with the Class of 1956. He entered the United States Army in 1958 and served until 1961, spending most of that time overseas in Germany and France. Graham enjoyed truck driving and was self-employed for many years. He later worked for Pelland-Swenson & Associates until he retired. Graham was united in marriage to the former Barbara Steinbach in July of 1967. He enjoyed camping, traveling, going to truck shows in Las Vegas, spending lots of time in the garage building things, and spending time with his family. He was preceded in death by his parents, Ivan and Norma; and his brother, Brad. Graham is survived by his wife of fifty-three years, Barbara; two children, LeRoy (Shannon) and Sandi (Eric); grandchildren, Amanda, Ashlee, and Ben Keeney, Gannon, and Alec Wilcox, Weston Piekarski; great-grandchild, Harper; and brother, Brian (Judy) Keeney. A memorial service will be conducted at Green-Larsen Mortuary on Friday, April 9, 2021 at 10:00 a.m. Visitation will begin one hour prior to service time.

The family of Graham Lloyd Keeney created this Life Tributes page to make it easy to share your memories.

Send flowers to the Keeney family.