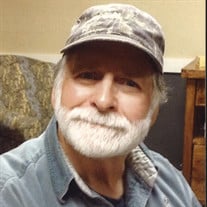 Harvey Ross Brindos, 70, of International Falls, Minn., died unexpectedly Wednesday, Jan. 23, 2019, at his home. Harvey was born Sept. 20, 1948, in the Falls to Max and Corinne (Corky) Brindos. Harvey graduated from Falls High School in 1966, attended Bemidji State College and Thief River aviation as an aircraft mechanic and pilot. Following his education, he enlisted in the Air Force for four years and was stationed in Grand Forks, N.D., serving as a crew chief on a B52 Bomber. After moving back to the Falls, he worked for Boise, was self-employed for many years, then partnered in Langdon Floral and finally as a mechanic for Kevin Nagurski, who he greatly admired. He retired in 2017. He wrote humorous poetry and had a unique sense of humor. As an extremely gifted and talented individual, his accomplishments extended from building airplanes to artistic plaques and photography. His love for the outdoors and Rainy Lake included deer hunting, fishing, berry picking and spending time at the remote log cabin "Timber Hitch," which he and his father built. He was preceded in death by his father, Max Brindos. He is survived by his mother, Corky Brindos; sisters, Maxine (Robert) Hochman of Staten Island, N.Y., and June (Johnny) Mason of Deer River, Minn.; son, Trevor (Donna) Biggs in North Carolina; daughter, Rachelle Elam in North Carolina; a granddaughter and two grandsons; a favorite uncle, Duane (Maureen) Johnson of St. Cloud, Minn.; and many cousins. His very special lifelong friends, Steve Bilben, Alaska, LeRoy Thurlby, Northome, Minn., and Brent Bocnuk of the Falls. He will be sadly missed by his loving family and friends. A celebration of his life at the family hunting shack will be announced at a later time.

The family of Harvey Ross Brindos created this Life Tributes page to make it easy to share your memories.

Send flowers to the Brindos family.