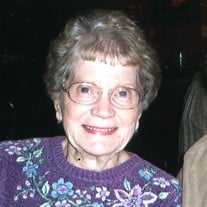 Helen Elizabeth Museta, 92, of International Falls, Minnesota died on Wednesday, February 20, 2019 at the Cook Hospital & Care Center. Helen was born in Whitemouth, Manitoba, Canada on February 7, 1927 to parents Alfred and Charlotte (Boesem) Van Walleghem. She was united in marriage to Stephen Museta on April 26, 1947 at St. Thomas Aquinas Catholic Church in International Falls. Helen lived in International Falls most of her life. Due to declining health she became a resident of Ridgeview Assisted Living from 2010 until 2017, then moving to the Cook Hospital and Care Center in Cook, MN. She received excellent care from both Ridgeview and the care center. Prior to her marriage Helen was a cosmetologist at Denis Salon in Fort Frances, Ontario, Canada. After her children started school she worked as a store clerk at J.C. Penney in International Falls. Helen enjoyed knitting, crocheting, sewing, gardening, and canning. She was especially known for her dill and beet pickles, and her homemade sauerkraut. Of all things she enjoyed and was great at, the most special of all is that she was the best grandmother anyone could have asked for, always ready to spend time with her grandchildren. She was a member of the St. Thomas Aquinas Church and the Catholic Daughters. Helen was preceded in death by her parents, Alfred and Charlotte; her husband, Stephen, who passed on February 15, 1995; brothers, Edward, Charles, George, and Henry; and sisters, Dorothy, and Anna “Anne” Marie Bjornson. Helen is survived by her son, Stephen Museta (Bobbi Dougherty) of International Falls; daughter, Susan (Brian) Vidor of Mt. Iron, MN; five grandchildren, Kristen (Richard) Busch, Drs. Nicholas (Shanna) Vidor, Ashley (Jeffrey) Briggs, Cassie (Paul) Costley, Blake Museta; eight great-grandchildren, Riley and Shay Busch, Isabelle Vidor, Jackson, Takoda, and Isabelle Briggs, Cohen and Kade Costley; and sister, Bertha Alexander of Arborg, Manitoba, Canada. The Funeral Mass will be held on Monday, February 25, 2019 at 11:00 am at St. Thomas Catholic Church. A visitation will be held one hour prior to the funeral. Interment will be at Forest Hill Cemetery in International Falls. If so desired, the family would prefer memorials to the St. Thomas Aquinas Church or School, 810 Fifth Street, International Falls, MN 56649.

The family of Helen Elizabeth Museta created this Life Tributes page to make it easy to share your memories.

Send flowers to the Museta family.