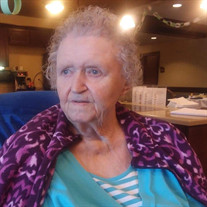 Irene Christine Locey, 81, of International Falls, Minnesota, died on Friday, July 19, 2019 at the Good Samaritan Society-International Falls. She was born on February 15, 1938 in Emo, Ontario, Canada. Irene grew up on a family farm north of Barwick, Ontario with her parents Paul and Anna Morken; three brothers, Mel, Ed, Wayne; and one sister, Hazel. Irene left the farm when she was seventeen years old. She worked for a while at Rainycrest Home for the Aged until she married Lyle Locey. Lyle came for Irene on November 22, 1955 and they married on December 1, 1955. After Irene received her Visa they moved to Fulton, Illinois on February 9, 1956. Lyle worked at a fertilizer plant for a few years then they moved to Bovey, MN in November of 1960 to operate a gas station. Irene and Lyle lived in there for a few years then relocated to International Falls to manage a bigger gas station and Irene could be closer to her family in Canada. Lyle passed away on October 3, 1967 due to a tragic car accident. Irene raised five children by herself, working several jobs to make ends meet. Irene was a wonderful mother, grandmother, and a very kind woman with a heart of gold. Home was where everyone was welcome. She liked berry picking and gardening. Family was her life. She loved being with family and having family dinners. She was a wonderful cook. She was preceded in death by her parents, Paul and Anna; husband, Lyle; daughters, Debbie Julien, and Linda Zawchenuk; and grandson, Ronnie Locey. Irene is survived by her son, Gene (Becky) Locey; daughters, Terri (Mike) Zahn, Laurie (Steve) Janttie; twelve grandchildren; Mike Zahn, Jeff (Carmen) Zahn, Jessica Zahn, Lacey (James) Kaminski, Britny Janttie, Nick Janttie, Ryan (Beth) Julien, Berri (Mitch) Lavern, Marcus Zawchenuk, Taylor Zawchenuk, Michael Fisher, Sabra Fisher; fourteen great-grandchildren; brothers, Melvin (Eleanor) Morken, Ed (Faye) Morken, Wayne Morken; sister, Hazel (Bob) Gratton; and wonderful friend, Rose Steinbach. A memorial service will be at the Mark Jerstad Fellowship Hall, Good Samaritan Society-International Falls on July 24, 2019 at 10:00 a.m.

The family of Irene Christine Locey created this Life Tributes page to make it easy to share your memories.

Send flowers to the Locey family.