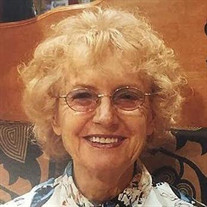 Irene Kingsley Nye, age 86, of International Falls, Minn., passed from this earthly life into the presence of her Lord and Savior, Jesus, just as the Scriptures teach, early Wednesday morning, July 3, 2019, with her precious caregivers, Stephanie and Maria of the Littlefork Care Center, Littlefork, Minn., by her side. She was born to the late Mr. and Mrs. Sydney (Betty) Ashmead on May 2, 1933, in Selukwe, Rhodesia. She had two siblings, Phil and Ruth, who have both preceded her in death. Irene attended school in Salisbury, Rhodesia, (now Zimbabwe), and after graduating high school was unable to further her education as she had to support her siblings and mother. She became a bookkeeper at CABS, a building and loaning institution in Salisbury, the capital of Rhodesia. When she met her husband-to-be, they married and moved to Saltash, Cornwall England, where her eldest son, Gary, was born. They later returned to Rhodesia where Irene had her other two children, Sharron and Mark. Preceding her in death was Robert Nye, whom she married later in life. They had a very sweet relationship for 3 ½ years. Irene is survived by her three children and spouses, Gary (Debbi) Trevor, Mark (Mirey) Trevor, of Phoenix, Ariz., and Sharron (Bob) Secrist of International Falls; three grandchildren, Keturah, Jonathan and Britney; and great-grandchildren, Xavier and London Grace. In fitting with Irene’s loving and thoughtful character, her wish was that her body be donated to the University of Minnesota for research and education in hopes of helping others. She also asked that any memorials be designated to Samaritan’s Purse, a nondenominational evangelical Christian organization providing spiritual and physical aid to hurting people around the world: P.O. Box 3000, Boone, N.C. 28607 or phone 828-262-1980. There will be no memorial service at this time, but her eulogy will be printed later.

Irene Kingsley Nye, age 86, of International Falls, Minn., passed from this earthly life into the presence of her Lord and Savior, Jesus, just as the Scriptures teach, early Wednesday morning, July 3, 2019, with her precious caregivers, Stephanie... View Obituary & Service Information

The family of Irene Kingsley Nye created this Life Tributes page to make it easy to share your memories.

Send flowers to the Nye family.