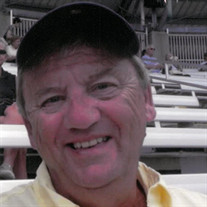 Jack Roy Bergstedt, 76, of International Falls, Minnesota, died on Sunday, May 2, 2021 at Rainy Lake Medical Center. He was born on July 29, 1944 at Duluth, MN to Sig and Mary Bergstedt. The family later moved to International Falls where his Dad worked in the mill as an electrician. Jack had two brothers, Ralph and Charles and two sisters, Kay and Judy. Jack graduated from Falls High School in 1962 and attended one year at the University of Minnesota. Jack was united in marriage to the former Shirly Gigstad on July 12, 1980. He served in the National Guard from 1966-1972 as a Staff Sergeant and received an honorable discharge. Jack would later return to International Falls to work as a papermaker at the Boise Paper Mill from 1966-1990. Following employment at Boise, he was elected to serve as a Koochiching County Commissioner, serving from 1992-1994 until illness forced him to retire. His hobbies included fishing, gardening, traveling south – especially to Florida, going to casinos, discussing politics and a love for cooking until recently. He was preceded in death by his parents, Sig and Mary Bergstedt; brother, Ralph Bergstedt and sisters, Kay Cirspinski and Judy Krantz. Survivors include his wife, Shirley Bergstedt; son, Paul (Linda) Bergstedt of San Ramon, CA; daughter, Jamie (Tim) Lofgren of Maple Lake, MN; four grandchildren and brother, Charles (Barbara) Bergstedt. A private memorial service for the family and close friends will be held on Thursday, May 6, 2021 at Zion Lutheran Church. If so desired, memorials would be preferred to the America Diabetes Association, P.O. Box 7023, Merrifield, VA 22116 or the American Heart Association, 7272 Greenville Ave. Dallas, TX 75231 or the charity of your choice. Interment will be at Forest Hill Cemetery in International Falls.

Jack Roy Bergstedt, 76, of International Falls, Minnesota, died on Sunday, May 2, 2021 at Rainy Lake Medical Center. He was born on July 29, 1944 at Duluth, MN to Sig and Mary Bergstedt. The family later moved to International Falls where his... View Obituary & Service Information

The family of Jack Roy Bergstedt created this Life Tributes page to make it easy to share your memories.

Send flowers to the Bergstedt family.