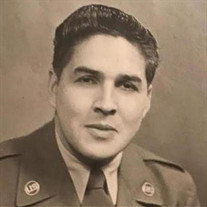 James J. Gordon, of St. Paul, Minn., died Sunday, March 3, 2019, in St. Paul. He was born April 26, 1931, at White Earth, Minn. On Aug. 12, 1973, he married Sofia Dierkhissing. He was retired from the Radisson in St. Paul, the United States Air Force and the United States Army. He was known for his love of shopping at thrift stores to buy treasures for everyone. He enjoyed going to the coffee shops to visit with everyone, especially his good buddies Ed, John and Kent, who took great care of him. He loved a good cigar and still went even after he stopped smoking, just to visit. He loved his food and was a connoisseur. But, most of all, he loved his cats and his faith. He was preceded in death by his wife, Sofia; mother, Christine; father, Joseph; infant brother; brother, Leonard; sisters-in-law, Donna Gordon and Gloria Gordon; and nephew, Michael Gordon. Survivors include his brother, Myron Wayne Gordon; nieces, Lois (Kurt) Fogelberg, Rose (Tom) Gordon, Roberta (Justin) Dunbar and Patricia Gordon; nephews, Allen (Elvira) Gordon and William (Rachel) Gordon; and many great-nieces and nephews. A memorial service was held on March 23, at St. Paul Believers Fellowship, with Pastor Kim officiating. A graveside service with Full Military rights will take place on July 11th, 2019 at 11 a.m. in the Veterans of Foreign Wars section of Forest Hill Cemetery, International Falls, Minnesota.

The family of James J. Gordon created this Life Tributes page to make it easy to share your memories.

Send flowers to the Gordon family.