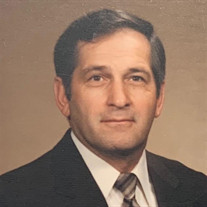 James (Jim) William Griffith, 82, of International Falls, Minn., passed away peacefully in his sleep Monday, Aug. 19, 2019, in Soudan, Minn. He was born at home Sept. 24, 1936, in Bridgie Township, Minn., and graduated from Northome High School, class of 1954. Jim was known for his love of physical labor and strong work ethic. He retired from Boise Cascade in October 2013 at the age of 76 with 51 years of service as a machine oiler. He was one of the oldest and longest employees of Boise Cascade at that time. When he had off-time from the paper mill, Jim could be found out in the woods operating his skidder and chainsaw for his independent logging and firewood business of 25 years. Jim enjoyed working in the woods, fishing, and hunting. He often hunted with family and friends, but in his later years enjoyed watching deer instead of hunting, saying, “I’ve killed enough deer for one lifetime.” Jim also enjoyed watching football and was a life-long Vikings fan. He had a love of old movies, especially westerns. He was a kind man with a fun sense of humor who was pleasant to be around. In retirement, Jim enjoyed trips to the casino and could often be found at Fortune Bay Casino, affectionately coined “Torture Bay” by him. He is survived by his children: Scott (Cathy) Griffith of Oklahoma City, Okla.; Natalia Griffith of West Palm Beach, Fla.; Sharon Griffith; Dan (Debbie) Griffith; Danita Ducharme, all of International Falls, Minn.; Lori (John) Boykin of Chandler, Ariz., and Lisa (Terrence) Holden of Burnsville, Minn.; 17 grandchildren and 10 great-grandchildren; his sister, Dolly (Gary) Fisher of Northome, Minn.; as well as numerous nieces and nephews. He was preceded in death by his parents, William (Bill) and Alice Griffith; and two older brothers, Lloyd Griffith and Raymond Griffith; as well as former wife Donna Iverson and friend Mary Mastin. Jim’s memory will be cherished by many, including former wife Sharon Groskreutz, and friend Barb Stahlberg. A funeral service will be conducted at 11 a.m. Saturday, Sept. 14, at Hope Lutheran Church, Northome. Flowers can be sent prior to the service to: Dolly Fisher, 12031 Lake St., Northome, MN 56661. Cards of condolence may be sent to: Griffith Law Office, 343 Third St., International Falls, MN 56649. Memorials may be made in Jim’s honor to the charity of your choice.

The family of James "Jim" William Griffith created this Life Tributes page to make it easy to share your memories.

Send flowers to the Griffith family.