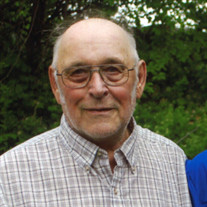 James “Jim” Podlak passed away Thursday, November 21, 2019 at Rainy Lake Medical Center in International Falls. Jim was born January 15, 1944 to Mary and Joseph, in Baudette, MN. Jim grew up in Baudette, attending school there and graduated from Lake of the Woods High School in 1963. Shortly thereafter, Jim moved to International Falls and started work at the Insulite division of Boise Cascade until it closed in 1984. He then went to work at International Bildrite until he retired in March of 2014. Jim was united in marriage to Janice Mahle on October 27, 1973. To this union, two children were born, Amy and Joe. Throughout his life, Jim enjoyed and passed on many of his passions to his children and grandchildren. He loved deer hunting and ice fishing with Joe, and fishing in the summer with friends. Jim was a self-proclaimed “jack of all trades” and would spend his spare time welding or building, tearing apart tractors or anything else that once ran, and re-building until it worked. He enjoyed cracking open a cold one with friends, especially in the shade of the garage. He always had a story to share, and often left you wondering if it was true or not. Jim also enjoyed gardening for many years, thumbing through the Harbor Freight catalog, making jerky, and having coffee visits with friends and family. Jim's biggest joy was spending time with his four grandchildren, typically encouraging mischief. He gave many lawn mower rides, took them fishing, and always offered advice and love. One of the highlights of visits were Grandpa's walleye dinners. Jim will be deeply missed by all who knew him. Waiting for Jim at the gates of heaven, was the family dog Kobi. Also having gone before him, are Jim's parents, Janice's parents Selmer & Evelyn Mahle, Jim's sister Josephine and brothers in law Carl Aery, Oscar Mahle, John Mahle, and Larry Mattison. Jim was also preceded in death by nephew David, and niece Wanda. Left behind are Jim's wife, Janice, daughter and son in law Amy & Jeremy Purcell of Thief River Falls, and son Joseph, of International Falls. Also surviving Jim are his four grandchildren: Samuel, Abby, Nicholas, and Noah, all of Thief River Falls. Jim is also survived by sisters Kathleen Mattison of International Falls, Agnes Pederson of Kalispell, Montana, and brother Tom Podlak and wife Arlene, of Mahnomen, MN, sisters and brothers in law Judy and Ollie Boomgaarden, Marilyn & Butch Keys, Dan & Maureen Mahle, and Joan Mahle. Jim is also survived by many treasured nieces and nephews. Many dear friends of Jim are also left to mourn his passing. At Jim's request, there will be no funeral.

The family of James "Jim" Podlak created this Life Tributes page to make it easy to share your memories.

Send flowers to the Podlak family.