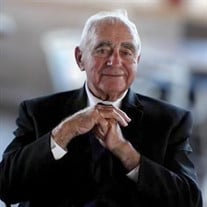 James (Jim) Hilbert Rolando, 92, passed away on Thursday, July 22nd, 2021, at the Littlefork Care Center in Littlefork, MN. Jim was born August 27, 1928, in Ely, MN, to James and Ellen (Toutloff) Rolando. He was united in marriage on July 16, 1955, to Mary Maureen Gauer. Jim was a 1946 graduate of Ely High School and graduated from the University of Minnesota- Duluth in 1950. After college, Jim began his teaching career in Sentinel Butte, ND; after one year of teaching, Jim enlisted in the United States Army where he served until his discharge in 1953. Jim returned to teaching in 1953 in Mandan, ND. In 1957, Jim returned to the Iron Range to teach and coach in Gilbert, MN. In 1962, Jim moved his family to Missoula, MT where he taught while also completing his master’s degree in Education at the University of Wyoming. In 1964, Jim and his family returned Minnesota, where he continued his teaching/coaching career in Eveleth, MN. While coaching in Eveleth, he guided the Golden Bears to their first ever Minnesota State High School basketball tournament. In 1971, Jim moved his family, one last time, to International Falls, MN, where he completed his career as a teacher, coach, and athletic director for the International Falls School System from 1971-1992. Jim enjoyed his long-time high school basketball coaching career. Jim enjoyed fishing and hunting. In 1995, the Falls Daily Journal named him “Mr. Walleye.” He enjoyed his grandchildren and loved spending time with them. He was an avid Vikings and Twins fan and enjoyed watching college basketball. He was enshrined into the Bronco Athletic Hall of Fame’s Class of 2017. He was a member of the Elks Lodge, The Knights of Columbus, American Legion, and the Bois Forte Band of Chippewa. His childhood nickname, “Pooner”, stayed with him throughout his life. He was loved by many and will be truly missed. Jim is preceded in death by his parents, Jim and Ellen Rolando; brothers, Charles Rolando and Ronald Rolando. Jim is survived by his wife, Mary Rolando; sons, Richard (Jean) of Lake Elmo, MN, John (Ann) of Aiken, SC, Thomas (Diane) of Wayzata, MN, and Donald (Nikki) of International Falls, MN; grandchildren, Karinda (Mike) Duffy, Jaclyn, Kaitlyn, Trevor, Grady, Michael, Madeline, Easton, and Ella; sister, Mary Ellen Gotchnik; and many nieces and nephews. The Funeral Mass of the Resurrection will be held Friday, July 30, 2021, at 1:00 pm at St. Thomas Aquinas Catholic Church in International Falls, MN. A visitation will begin an hour prior to the funeral and will include the recitation of the Holy Rosary. Burial will be at St. Thomas Aquinas Catholic Cemetery. In lieu of flowers, the family requests that memorials be made to either the Falls Education Foundation, PO Box 933, International Falls, ​MN 56649 or St. Thomas Aquinas Catholic Church, 810 Fifth Street in International Falls.

James (Jim) Hilbert Rolando, 92, passed away on Thursday, July 22nd, 2021, at the Littlefork Care Center in Littlefork, MN. Jim was born August 27, 1928, in Ely, MN, to James and Ellen (Toutloff) Rolando. He was united in marriage on July... View Obituary & Service Information

The family of James Hilbert Rolando created this Life Tributes page to make it easy to share your memories.

Send flowers to the Rolando family.