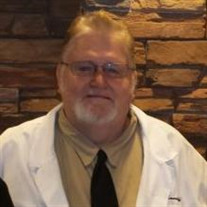 Not sure what to send?

James Lawrence Saurdiff “Doc” November 19th, 1957 - December 16th, 2021 Dr. James Saurdiff was born on November 19th, 1957 in International Falls Minnesota, to Lawrence and Beverly Aileen (Borah) Saurdiff of Alexandria, MN. As a young boy Jim spent his childhood in International Falls and Wahpeton, ND. He and his family moved to Alexandria when he was a teenager. He graduated from Jefferson Senior High in 1976. After graduation, Jim moved to St Cloud, MN to pursue his career in Optometry. He completed his undergraduate work in St Cloud and then moved to Portland Oregon where he completed his Doctor of Optometry at Pacific University. Doc Jim had a passion for helping people and found great satisfaction in helping others obtain excellent vision. He initially began his career by opening the Duluth Eye Center in Duluth, MN. This is where he met his lifelong friend and business partner Al Jensen. Both Doc and Al realized they genuinely enjoyed small community living and decided to leave the Duluth area and opened the Falls Eye Center in International Falls. They worked closely together for the next 30 years. Over the years this partnership grew beyond business and friendship, they became family. Doc was a man of many passions. He loved music and was active in high school concert choir, carolers, and ensemble choirs. He and his younger brother Larry joined rock bands that rivaled Guns and Roses and Poison. Jim’s exceptional bass playing, and outstanding vocals gave the bands a solid foundation. In addition to his passion for music he had a love for hunting, snowmobiles, automobiles, wild berries, Hawaiian Pineapple, and politics. Jim worked on automobiles from the moment he learned to hold a wrench. He was always building and rebuilding cars. His greatest love was his 1957 “Bevy” he spent years making sure Bevy was built to perfection. He then built his GTO “Red” which he was extremely proud of as well. Doc loved his old cars as well as vintage snowmobiles. This was a passion he shared with his brother Larry, together they created a website for vintage sled lovers and hosted multiple events for vintage sled riders in International Falls. Doc will always be remembered as a legend in the vintage Snowmobile arena. Doc loved the wild blueberry season. He could never get enough of the big blueberries from up north and would get buckets full of them every year. His sister Nanci introduced him to the golden pineapple of Maui, and he was an instant fan. Nanci would bring it home or specially order it for him. He loved it so much he would eat it until the acid burned his mouth. He just couldn’t help himself, he loved it that much. Doc’s hunting friends will always remember him as one of the luckiest guys around. He was also an amazing storyteller. He loved to tell his hunting stories to anyone that would listen. He was extremely proud of his prize-winning buck that was recognized by the “Hall of Fame,” in 1999. A replica of his prize buck hangs proudly in the Falls Eye Center. He also had multiple prize-winning fish mounted as well, which he added to his collection of fish and game. Doc created a memorable life with his family, his friends, and with his beloved community in International Falls. He had a big heart and an amazing sense of humor that will greatly be missed. Doc is survived by his four siblings: Teri Johnson of Alexandria; Robert from Alexandria; Nanci from Sequim, WA; and Larry Preston from Scottsdale, AZ. He has several nieces and nephews and great nieces and nephews. Doc was preceded in death by his parents, Beverly and Ronald Saurdiff. A Celebration of Life will be held on June 4th, 2022 at 12:00 p.m. at 3016 Town Road 224 in International Falls. Interment will be conducted on June 5th, 2022 at 3:00 p.m. at St. Mary’s Cemetery, 723 West Winona Road in Alexandria. For more details and to please RSVP, go to https://www.docjimfest.com

The family of Dr. James Lawrence Saurdiff created this Life Tributes page to make it easy to share your memories.