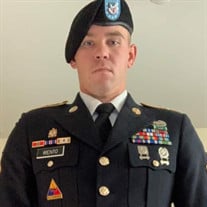 SSgt. James Lynch Wento, 34, formerly of Ray, Minnesota died on January 5, 2021 near Seoul, South Korea. Staff Sergeant James Lynch Wento was born November 28, 1986 and passed away January 5, 2021 while serving an overseas tour in South Korea. James was serving as Headquarters Platoon Sergeant and belonged to the 2-2 Assault Helicopter Battalion stationed in Yongsan, South Korea. While conducting Live Fire Exercises the vehicle experienced an accidental rollover that claimed his life. James graduated from Littlefork-Big Falls High School in 2005. He played football, basketball, and baseball. He was a beloved student and athlete. After graduation, he joined the Air National Guard out of Duluth, MN as a Security Forces officer. After 3 years, he made the transition to active duty Army. That is where he made his family. His official job title was Wheeled Vehicle Mechanic. He was stationed at Fort Bliss Texas where he served two combat tours to Afghanistan. Upon return, he was stationed at Fort Huachuca Arizona. From there he was deployed to South Korea. He was currently on his 2nd consecutive tour of service in South Korea. The outpouring of support and messages from James’ current and past Soldiers, Leaders, Friends and softball teammates is a testament to the man he was and will be remembered as. He was the type of person that would give the literal shirt off his back if you were in need. He was an avid Softball player, fierce competitor who also helped organize Toy for Tots and Breast Cancer Awareness Tournaments to benefit his local community. He is preceded in death by both maternal and paternal grandparents, nephew Dalton, Uncle Mike Burger, Aunt Mitzie Burger, and Uncle Steve Burger. He is survived by his daughter Jaelyn, his parents Mary Kay and TR Wento, his loving sister Katy Wento, Aunt Joan (Dennis) Peka, Uncle Marty (Char) Burger, Uncle Jim Burger, Aunt Janet Burger, Aunt Jeanne Burger, Uncle Danny Burger, Aunt Carol Mannausau, Aunt Robin (Rick) Tilander, Aunt Laurie (Jeff) Lightfoot, Aunt Kay Wento, and numerous cousins.

The family of SSgt. James Lynch Wento created this Life Tributes page to make it easy to share your memories.

Send flowers to the Wento family.