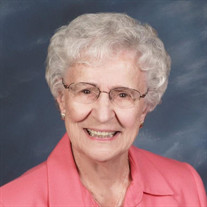 Jennie (Boresiuk) Skrien, 93, died peacefully on Wednesday, June 30, 2021, at Morningside Heights Care Center in Marshall, Minnesota. Jennie was born February 22, 1928, in Fort Frances, Ontario, Canada, to John and Anna Boresiuk. The family moved to International Falls in 1932, where she lived most of her life. Three of the main focuses of her life were family, church, and cabin. After graduating from high school in 1946 at the top of her class, Jennie attended Macalester College for two years, which consumed all of her educational savings. Shortly thereafter she met Vernon Skrien through his uncle and aunt, John and Evelyn Dunham, who were neighbors and for whom she had babysat. There were some concerns in those days that a Ukrainian (Jennie's ancestry) and a Norwegian (Vernon's ancestry) might not make a good match. But on November 26, 1949, she and Vernon were married. They had six children: Sheryl who died at birth, Gary (Lori) of Marshall, Dale (Pam) of Manchester, ME, Linda of Albuquerque, NM, and Richard (Janet) and Douglas (Kristin) of Minneapolis. They remained married until Vernon died in 1988. Jennie worked at several jobs after graduating from high school, but quit to become a full-time mother when her first child was born. Nineteen years later, she started working as secretary at the Falls Elementary School and later at Holler School. She worked as secretary for 22 years before retiring. She, along with her sister Helen, was an active member of two groups of friends named the “After 5 Club” and the “Tuesday Evening Ladies Literary and Cultural Society". Vernon and Jennie were members of Zion Lutheran Church in International Falls. The church played a large role in the family's life, but especially in Jennie's life. She participated in church functions every chance she could get and, when a new church was being built in 1990, she donated the altar to the church in memory of Vernon. Jennie had an expansive spirit and loved to travel, especially to visit her children and grandchildren. She was always enthusiastically welcomed and was willing to help in any way she could. If she wasn't babysitting or changing diapers or playing board games with her grandchildren, she was pleasing the parents by making favorite foods, including fried walleye, Ukrainian Easter bread, borscht, turtle bars, and blueberry pies. On one notable visit to Dale, she filled his freezer with 15 blueberry pies! She was an intrepid person and never afraid to try new things, including taking horseback riding lessons with her grandchildren, flying in hot-air balloons in New Mexico, parasailing and jet-skiing in Cancun, traveling to Europe, Africa, Israel, and China, and taking woodworking adult education classes at Falls High School that led her to build two magnificent grandfather clocks. Jennie was very close to her two sisters, Mary Mahle and Helen Weum. Her children used to joke about all the "call Helen" post-it notes that festooned the kitchen counters and table top. The three sisters, together with their parents, John and Anna Boresiuk, lived most of their lives within a few blocks of each other in International Falls, and so had regular get-togethers, including gatherings at one of their houses every Thanksgiving, Christmas, and Easter. After the children grew up, the families started a tradition of a newsletter that would get passed around among the families, which turned into a reunion every two or three years of all the descendants of Jennie's parents. As a legacy, these reunions continue to this day. The third focus of Jennie's life was the cabin that she and Vernon built on Dryweed Island on Rainy Lake in 1963. The family spent summers at the cabin for the next four decades until Voyageurs National Park took control of the land in 2003. Jennie loved being at the cabin, despite the fact that it had no electricity, no telephone, and no running water and that she had to take care of 5 children by herself during the day while Vernon was working in town. Visitors were always welcome. The more, the merrier. The cabin had beds to sleep 11 people, but at times there were so many visitors that some had to sleep on the floor in sleeping bags. After Vernon died, Jennie continued to spend as much time as possible at the cabin either with others or, often, by herself. She would lug 5-gallon jugs of fresh water and gasoline and all the necessary food supplies across two miles of open water by boat to the cabin. When she was in her 80's and the kids began to express some concerns about Jennie being alone on the island, she accommodated them by toting a (very heavy) old-style battery-powered cell phone. Only the worst weather and highest waves would stop her from throwing on a life jacket and heading across the water toward the cabin. Jennie is survived by four of her children (Dale, Linda, Richard, Douglas), nine grandchildren Jamie(Crystal) Skrien, Tera(Dave) Vohler, Julia(Josh) Dugal, Jason Skrien, Jett Skrien, Lisi Skrien, Shelby Skrien, Gina Skrien, Sarah Skrien, Sidney Skrien, Abigail Skrien), four great grandchildren (Cheznee Skrien, McKynlee Skrien, Macy Skrien, Kalan Murray), and two step great grandchildren (Darius Vohler and Zeandra Vohler). She was preceded in death by her parents, her husband Vernon, her sister Helen(Vernon) Weum, her sister Mary(Walter) Mahle, her infant daughter Sheryl and her son Gary. Her funeral is set for 1pm, August 12, at Zion Lutheran Church with Pastor Mark Peters officiating. Interment will be at Forest Hill Cemetery in International Falls. In lieu of flowers, donations can be made to Zion Lutheran Church or to the Vernon Skrien Engineering Scholarship Fund at Rainy River Community College, both in International Falls, Minnesota. To donate to the scholarship fund, go to rrccfoundation.org or mail your donation to Rainy River Community College Foundation, 1501 Highway 71, International Falls, MN 56649.

The family of Jennie Skrien created this Life Tributes page to make it easy to share your memories.

Send flowers to the Skrien family.