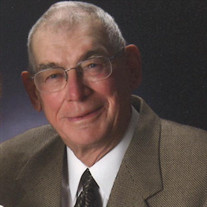 Jerome William Shermoen was born in Fargo, North Dakota, on January 22, 1927, to parents Ole and Margaret Shermoen. He graduated from Dilworth, Minnesota, high school, then graduated from North Dakota State University after two years in the Army, including tours in Japan and South Korea. He graduated first in his class from the University of North Dakota School of Law in 1952. After briefly working as a lawyer in Chicago, Illinois, and Enderlin, North Dakota, he practiced in Fargo for twelve years before moving to International Falls in 1966, where he was an attorney for forty years, with the able assistance of his trusted friend, Gail Costley. Jerry had a deep affection for his many dogs, who were his constant companions when hunting or fishing on his beloved Rainy Lake. He was a lifetime sponsor with Ducks Unlimited, an Elks Club member for almost seventy years, a proud member of the local VFW and served for 30 years as a board member at Bremer Bank of International Falls. He was an avid sports fan of all the Minnesota teams and rarely missed a televised game in his later years. A family trip to watch the Twins in their new Target Field in the comfort of a suite was a memorable event. He loved to play golf all his life but improved with age and won several senior tournaments in the area. He was proud of shooting his age numerous times while in his 70s. His second wife, Toni, predeceased him in 2009 as did their infant son, Jeffrey, in 1969. His former wife, Dorothy, died in 2012. Jerry is survived by his sons, Steven (Nancy) and Jerrod (Beth) of International Falls, Scott of Lincoln, Nebraska, and his daughter, Susan (Bob), of Grand Forks, North Dakota. He has nine grandchildren, Michael Shermoen, Andrew Shermoen, Matthew Shermoen, Phillip Shermoen, Evan Shermoen, Erica White, Ryan Franklin, J. Shermoen and Maria Shermoen, and eight great grandchildren, Ellery White; Reese, Kale and Remi Franklin; and William, Charles, Samuel and Louis Shermoen. Jerry is also survived by his brother, Richard (Nancy), of Topeka, Kansas, two nieces and three nephews, and has two deceased sisters, Jeanine and Margaret Jane. Please join Jerry’s family for a celebration of his life on April 26, 2019, at 5:00 p.m. at the International Falls Elks Club. The family prefers memorials to the International Falls Humane Society, Rainy River Community College Foundation or Ducks Unlimited.

Jerome William Shermoen was born in Fargo, North Dakota, on January 22, 1927, to parents Ole and Margaret Shermoen. He graduated from Dilworth, Minnesota, high school, then graduated from North Dakota State University after two years in the... View Obituary & Service Information

The family of Jerome William Shermoen created this Life Tributes page to make it easy to share your memories.

Send flowers to the Shermoen family.